SwitzerlandLuzernThings to do in Willisau, Switzerland

Things to do in Willisau, Switzerland

Willisau lies at the foot of the Napf landscape and is the economic and cultural center of the region. In this article, we have listed the best things to do in Willisau. The extensive educational offer as well as numerous leisure opportunities make Willisau particularly attractive. 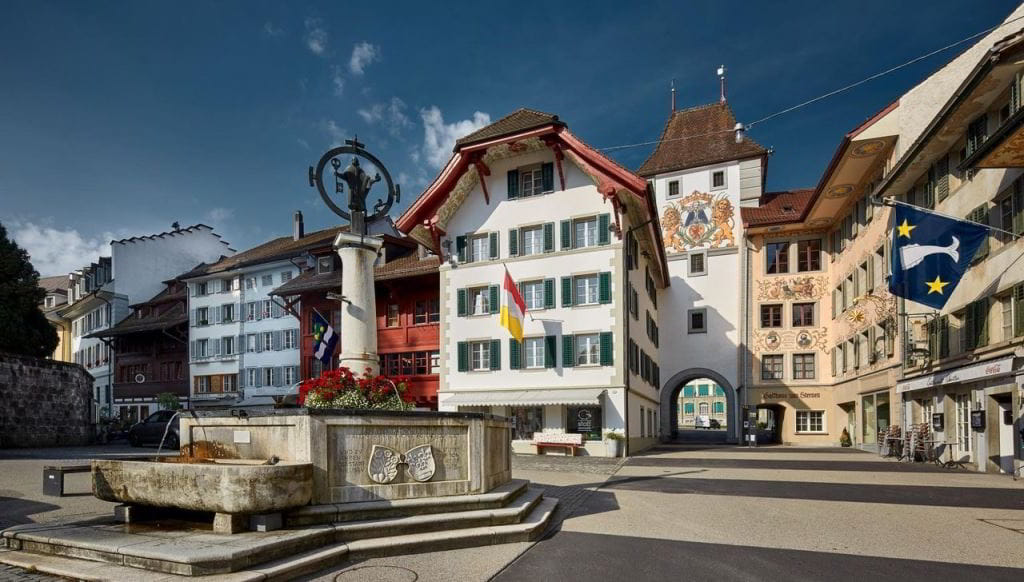 The cultural diversity and good transport connections also contribute to the high quality of life. In and around the historic city center you will find many attractive shops that make a shopping trip an experience. Willisau is situated in Canton of Lucerne, Switzerland. 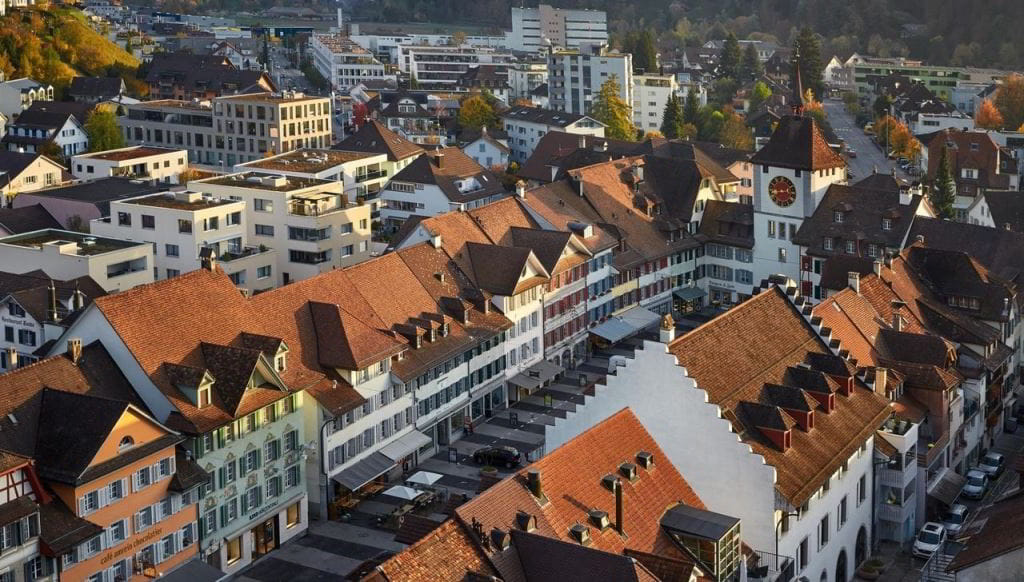 The generous and harmonious looking Hauptgasse – it is 250 m long from gate to gate, presents itself today as it was rebuilt after the last city fire in 1704. At that time, four fifths of the houses fell victim to the flames.

Only the church, the city fortifications, the houses at the Obertor and in the Mühlegass were spared from the fire. In the back alleys, the rows of houses were no longer laid out exactly the same as they were before 1704. Walking through main stret is one of best things to do in Willisau.

2. City gates (That’s one of the best things to do in Willisau) 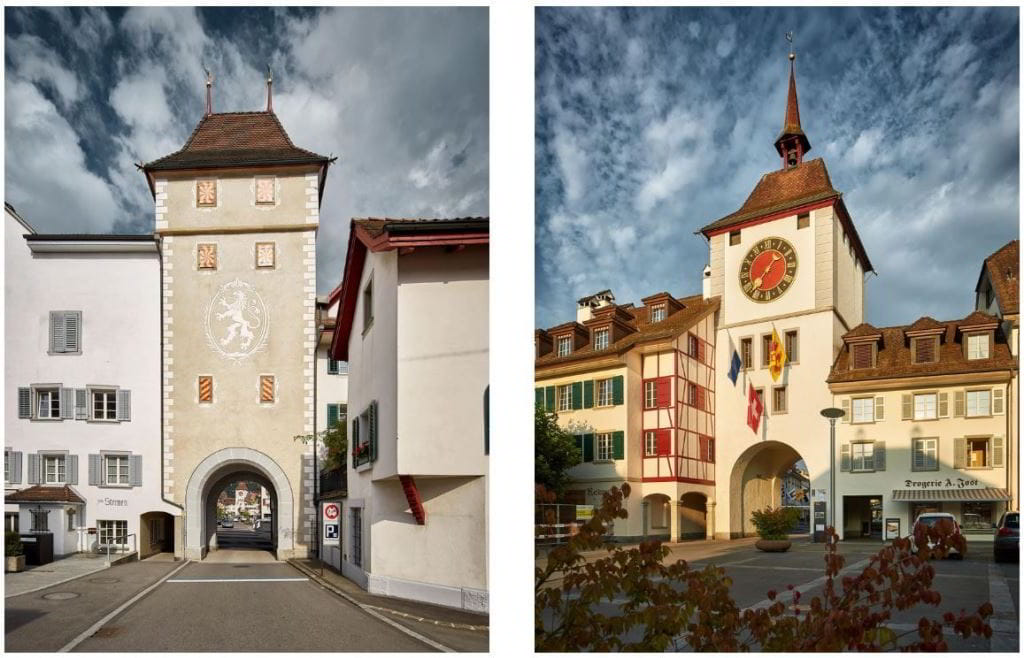 The Obertor was destroyed in the city fire of 1471 and looks like it was rebuilt in 1547. The Untertor was rebuilt in 1980 according to old templates with concessions to traffic. The last under-gate, also known as the time tower because of its clock, was demolished in 1854 because it was dilapidated.

The cantonal shooting club has the right to stay in the new tower room and keeps its collectibles there. The newly installed carillon can be heard daily at 11.30 a.m., 3.15 p.m. and 4.30 p.m. Different melodies sound depending on the season and the occasion. 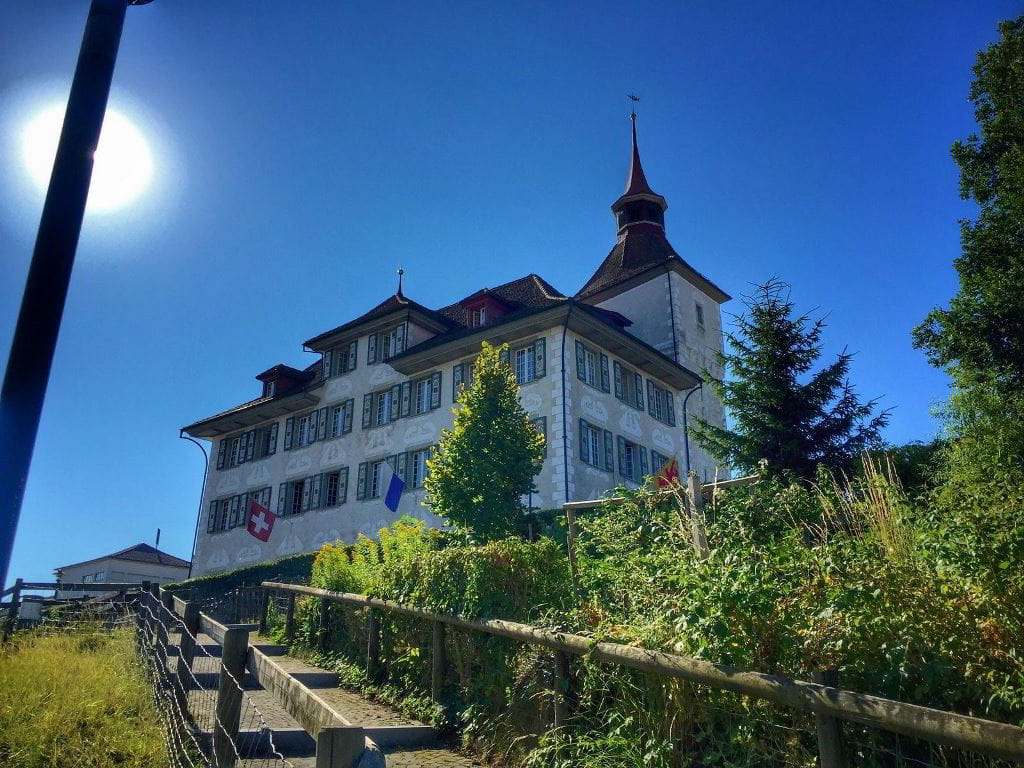 From the transition to the city-state of Lucerne in 1407 until the abdication of the Ancien Regime in 1798, Willisau was administered by a Lucerne bailiff. This spoke right, carried out official orders and collected the taxes. Initially, he lived in Lucerne and only came to the hinterland on court days and for particularly important and lucrative business. From 1651 he had permanent residence in Willisau. 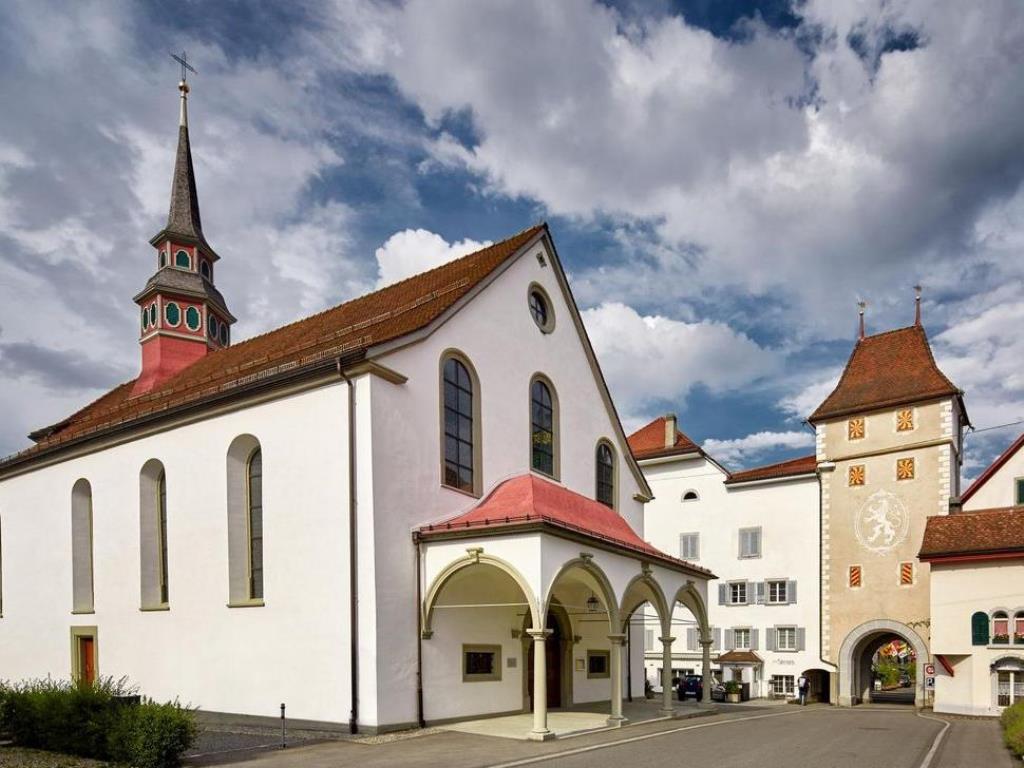 Legend has it that three men played cards on July 7, 1392. Because one of them lost all his money gambling, he drew his sword, thrust it into the air, and called it to pierce the body of Christ. Immediately five drops of blood fell on the table of the players.

The blasphemer Ueli Schröter is said to have been brought by the devil with a terrible roar. While trying to clean away the five drops of blood, the second player was hit by a blow, while the third, tortured to death by lice, collapsed on the threshold of the city gate. The drops of blood that the local pastor cut out of the table top are kept in the Holy Blood monstrance.

Every year, on the second Sunday after Pentecost, there is a big atonement procession – the Willisau Discharge Day.Around 100 years after the outrage, the wooden chapel was replaced by a Gothic building. 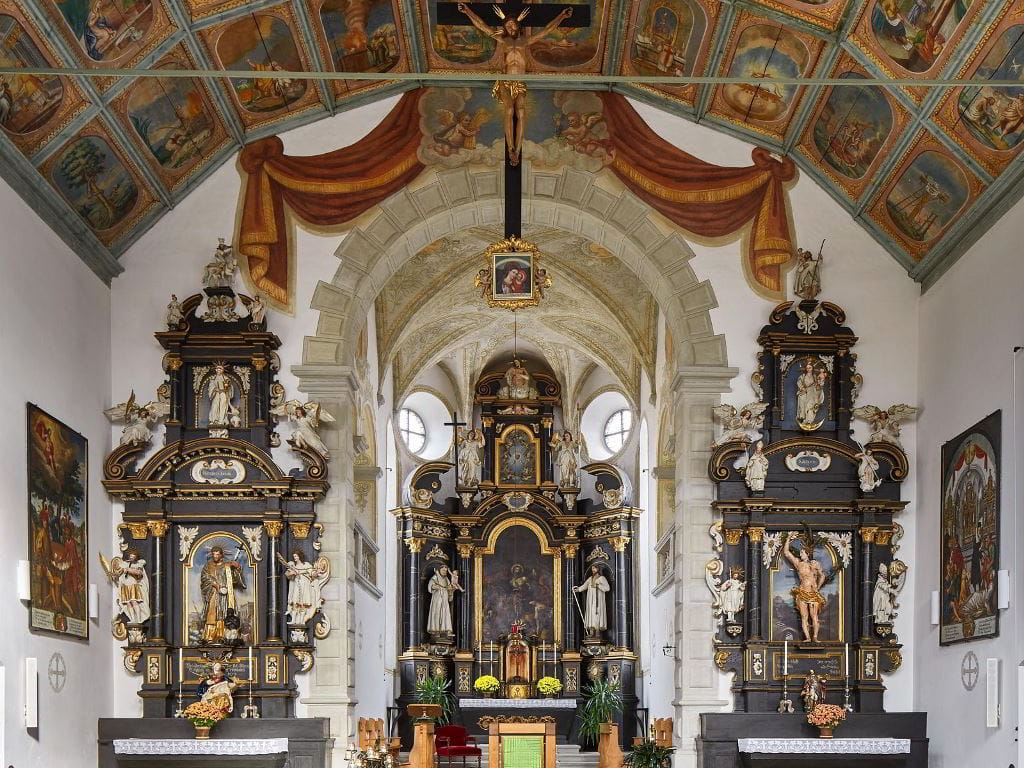 The current chapel dates from 1674, is still strongly committed to the Renaissance and has an open Tuscan porch. The three wooden early baroque altars were built a few years later. Eight oil paintings with the legend of the Holy Blood adorn the walls.

5. Parish church (That’s one of the best things to do in Willisau) 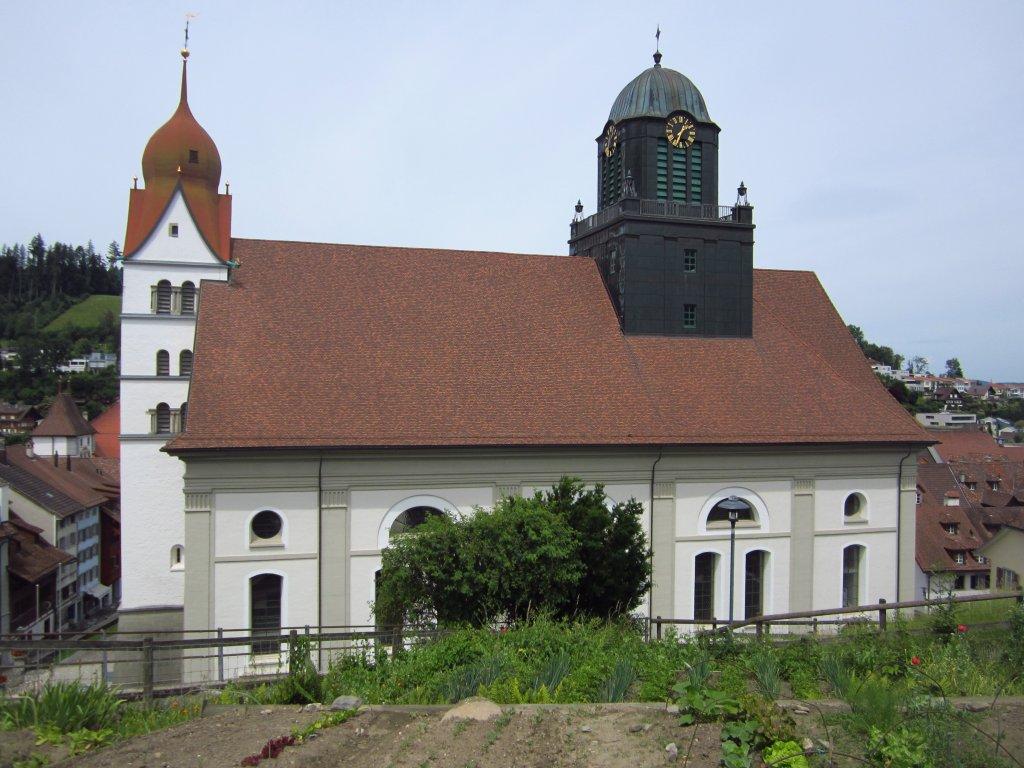 The late Romanesque bell tower from the beginning of the 13th century is considered the oldest building in the old town – it was built before the city was founded (1301/02) – and is one of the most beautiful Romanesque buildings in the canton of Lucerne.

Originally the tower was closed with a low pyramid. Today he wears an early baroque Welsh bonnet.To visit this church is one of best things to do in Willisau. 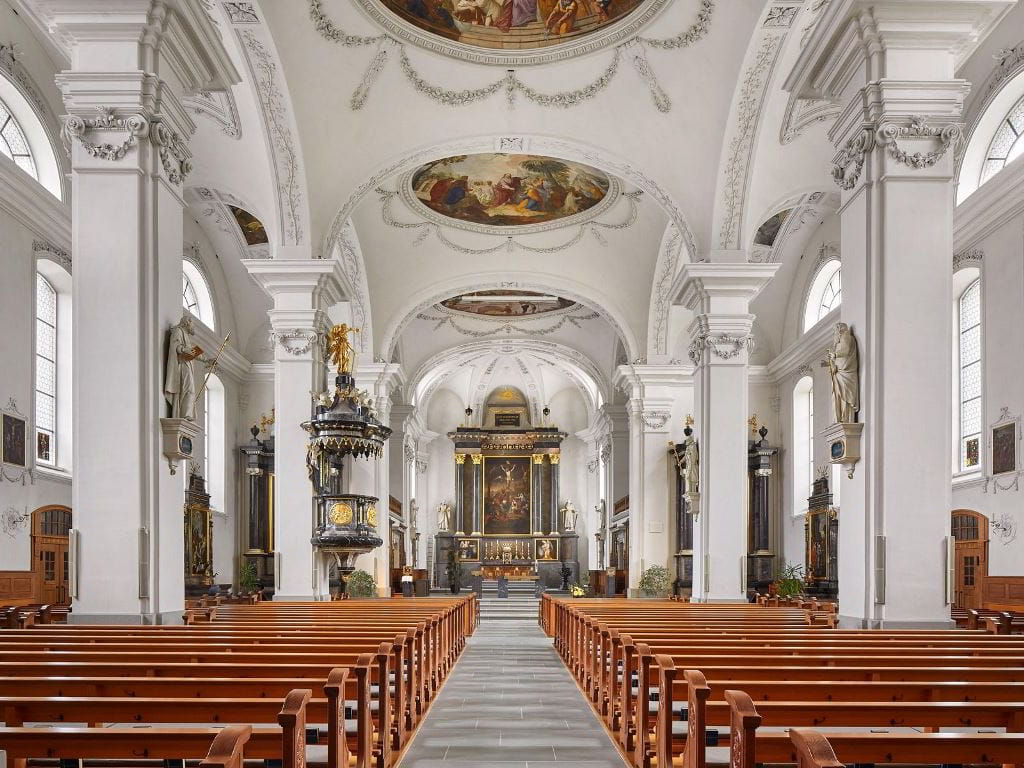 In 1810, today’s parish church of St. Peter and Paul, a classicist pillar hall, was completed according to plans by the well-known church builder Josef Purtschert von Pfaffnau. The old church, better proportioned to the bell tower, had become too small. Since the interior decoration was delayed for a long time, the church was only consecrated 12 years later, on June 2, 1822, by the papal nuncio.

The three city fountains were built around 1600 in the rare shape of a heptagon. In contrast to most cities, their water sources are not outside but inside the curtain wall. In the 1950s, the three dilapidated wells were demolished and rebuilt after old cracks and customs. 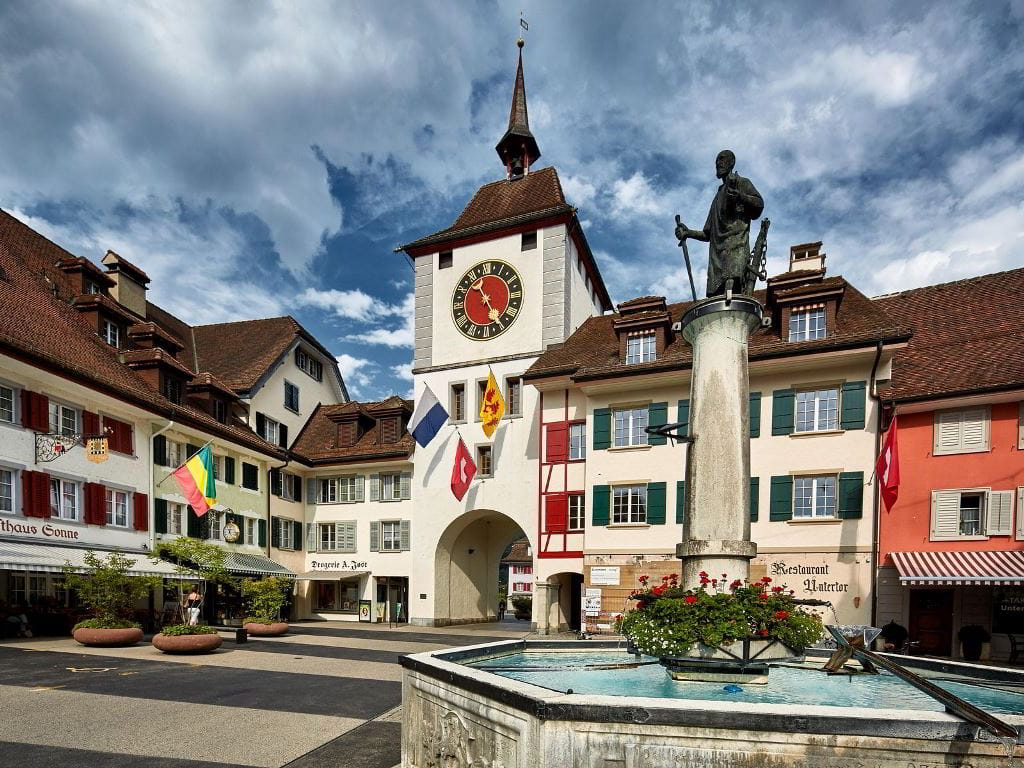 The two church patrons Peter and Paul and the Madonna and Child decorate the fountain columns. The bronze figures were created by the two Lucerne artists Rolf Brem (Paulus) and Franco Annoni (Madonna) as well as by Zurich’s Eugen Häfelfinger (Petrus).

Things to do in Willisau