SwedenKronobergThings to do in Vaxjo Sweden

Things to do in Vaxjo Sweden

With 70,000 inhabitants, Vaxjo is the largest town in southern Smaland. Vaxjo was built in the Middle Ages on a peninsula protected by the large Helgasjön north of the city and four smaller lakes south of the city. There are many things to do in Vaxjo Sweden. 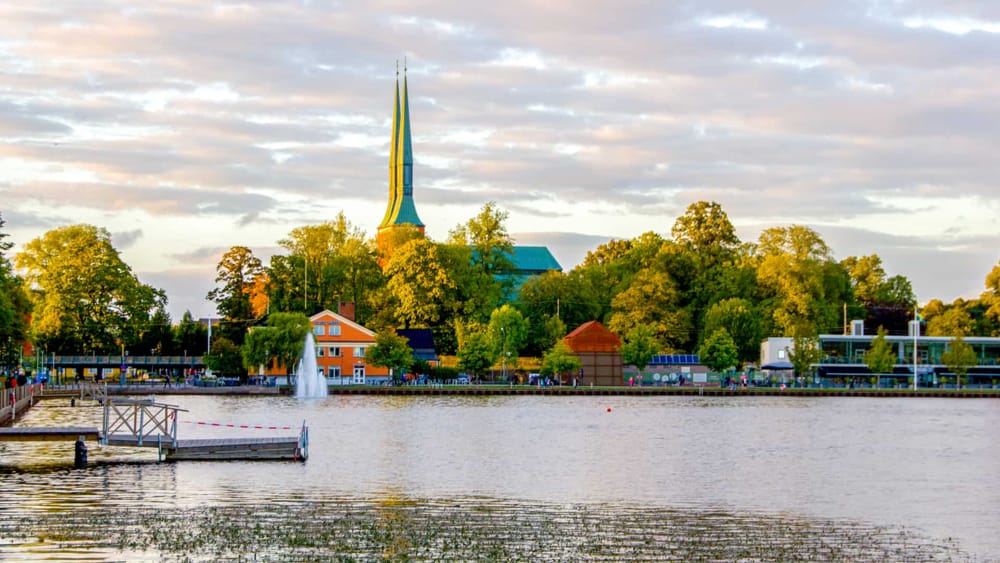 Today, Vaxjo is an economic and cultural center in the Kronoberg region. The city has several knowledge-intensive and high-tech companies as well as Linnaeus University with 15,000 students in Vaxjo. Vaxjo’s town center has a lively shopping life around the long pedestrianized Storgatan.

The streets in the center are laid out perpendicular to each other – something you often see in Swedish cities with an urban planning from the 17th century. Although Vaxjo was ravaged by major fires in 1838 and 1843, it has retained its original charm. Below we have listed best things to do in Vaxjo Sweden.

Vaxjo Cathedral is the oldest building in Vaxjo . The church was founded at the end of the Viking Age in the first half of the 1000s, when southern Sweden became Christian. It was an English missionary, Sigfrid, who built a wooden church here. In the following centuries, the church was altered and rebuilt several times.

Despite the name this attraction is also a county museum, dedicated to Småland and established in the 18th century.There’s still a sizeable exhibition about the county and its culture and history.

But since the 1930s it has turned its focus to Sweden’s glass industry, appropriate as Vaxjo is billed as the capital of the Kingdom of Crystal.The museum has more than 40,000 pieces of glassware, produced at over 100 Swedish glassworks, with its oldest examples dating back to the 1580s.

At Linnéparken you will also find the old, beautiful Vaxjo cathedral school and high school – called Karolinerhuset, where i.a. the world-famous botanist Carl von Linné went to school for 11 years.

Karolinerhuset was built around the year 1700 by stone from Kronobergs Castle, which at that time was in disrepair.Karolinerhuset functioned as a high school until 1850. Today the building is owned by the Swedish church.

Between 1843 and 1930 there was an exodus of around 1.3 million Swedes to North America. This was an enormous event considering the population of Sweden today is just shy of 10 million.

The Swedish Emigrant Institute researches this wave of emigration, and has a museum with exhibitions charting the causes and consequences of the exodus.

This places is selected as top attraction in Vaxjo. Curling around the north shore of Vaxjosjon is the city’s main park. You could come to relax by the water, or head off on a wander to see what you can find. Because there’s interesting history in the form of the Karolinerhuset. This building dates to 1715 and was a high school up to 1850. Its most famous student was none other than the world-changing taxonomist Carl Linnaeus.

On an island in Helgasjön lake are the ruins of a 15th-century fortress. For around 200 years this stronghold was on the border between Sweden and Denmark and duly bore the brunt of serious fighting. It was besieged, captured, reduced to rubble by the Danes no fewer than three times, and was rebuilt after each attack. Finally, after the Treaty of Roskilde in 1658 secured peace between the Sweden and Denmark the fortress became obsolete and was abandoned.

Berthed near the castle is a steamboat, the S/S Thor, which celebrated its 130th anniversary in 2017. Thor makes regular sightseeing trips around the lake in the summer months, with additional sailings scheduled for weekends. The boat is owned by the Småland County Museum and until the 1930s transported freight and passengers between Räppe and Asa. Since then it has been taking tourists and residents on leisurely tours around the lake for beautiful vistas of Kronoberg.

Teleborg Water, one of the best attractions in Vaxjo. Just past the city’s southern limits is a nondescript-looking water tower that is more fun that it might seem at first glance. That’s because the vaults in the tower produce the most amazing, sustained echoes, and people make their way from the city just to hear their voices bouncing off the walls. Naturally the tower is no more than a cheerful detour, but it promises a bit of free entertainment, more so if you have children with you.

If the weather takes a turn for the worse you could pass an hour or two perusing art at the municipal gallery. Entrance is free, as are the exhibitions for both Swedish and international art. The shows are very diverse and are designed to get people of all ages and backgrounds thinking about and discussing art. For all the lovers of art this is the best place where to go in Vaxjo Sweden.

Things to do in Vaxjo Sweden

In this post we are exploring best things to do in Lulea Sweden. Lulea is Sweden's 22nd largest city and here is Lulea University...

Uppsala is one of Sweden's oldest cities that offers many places to see in Uppsala. It was called Östra Aros until the 13th century...
- Advertisment -
Facebook
Instagram
Twitter