GermanyBavariaPlaces to visit in Aschaffenburg Germany

Places to visit in Aschaffenburg Germany

There are many places to visit in Aschaffenburg, but we have selected some of them. Aschaffenburg is worth a trip at any time of the year. In spring you can enjoy the famous magnolia blossom, in summer to the unique Pompejanum, in autumn to the oldest English landscape park in Bavaria, in winter to Cranach, Grünewald, Kirchner & Schad.

Aschaffenburg has an advantage because can visit various destinations within a short distance. Aschaffenburg is a town in the northeastern part of Bavaria, on the border with Hesse, in the Lower Franconia region. It is located near Frankfurt am Main and is considered part of the Frankfurt/Rhine-Main metropolitan region. For more articles from Germany check Baden-Württemberg Region. Let’s discover together places to visit in Aschaffenburg Germany.

The red sandstone castle is one of the most important and most beautiful buildings in Mannerism style. The castle church with Renaissance altar, pulpit and portal sculptures by Hans Juncker, the electoral living quarters, the world’s largest collection of architectural models made of cork, the state painting gallery with works by Lucas Cranach the Elder are unique.

2. Castle Garden (Selected as one of the best places to visit in Aschaffenburg)

Between Johannisburg Palace and Pompejanum there is a very varied park with a charming arcade above the medieval city wall, the classicist breakfast temple and part of the former city moat, which was designed by Friedrich Ludwig Sckell in the 18th century. Around the Pompejanum there is a Mediterranean-style, mid-19th century The resulting garden area with figs, araucaria, almond trees, vines, poplars and pines.

The replica of a Roman villa in Pompeii, which is unique in the world, was built at the instigation of King Ludwig I, inspired by the excavations in Pompeii. The architect Friedrich von Gärtner did not neglect any detail in the design of the atrium and the interiors, with the rich paintings and the mosaic floors, in order to offer art lovers an ideal replica to study the ancient culture.

4. Basilicia of Saints Peter and Alexander

As the only church in the world dedicated to Saints Peter and Alexander, the monastery was founded by Duke Liudolf of Swabia in the 10th century. In 982 Aschaffenburg – and with it the monastery – came to Mainz and the church and monastery developed into a defining factor for the preferred residence of the Archbishops of Mainz. During the visit this is one of places to visit in Aschaffenburg Germany. 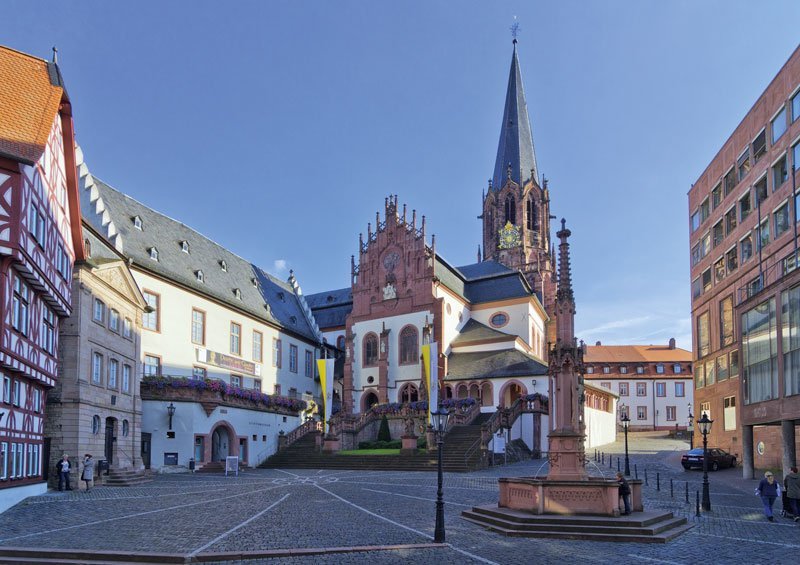 The museum’s medieval treasury houses one of the finest collections of goldwork and liturgical objects. Objects made of silver, rock crystal and gold as well as precious illuminations can be seen here. The treasury of St. Peter and Alexander includes all genres of medieval church art, outstanding examples of treasury art, illumination, textile art and panel painting at the time.

The profaned former church of the Aschaffenburg Jesuit branch (built 1619-1621 and badly damaged in the Second World War) with its elaborate stucco elements offers an impressive ambience for world-class art exhibitions that change four times a year.

As an extension of the Kunsthalle Jesuitenkirche, the Christian-Schad-Museum will be reflecting on the artist’s work from 03.06.2022 on the art movements of the 20th century, from Dadaism to Expressionism and New Objectivity to Magic Realism after 1945.

Theater Square, which takes its name from the Municipal Theater which is also located there, is in the old town and close to the Basilica we mentioned above. The trees that were chosen for the square are intended to bring the Mediterranean charm to Bavarian Germany. The theater itself was built in 1811 but like most buildings in Aschaffenburg it was badly damaged during the war.

8. The old town of Aschaffenburg

When you walk between the Johannisburg Castle and the town hall, you walk through a narrow street with traditional half-timbered houses. This is part of the old town of Aschaffenburg and it is beautiful.

In fact, many of the aforementioned Aschaffenburg attractions are located here or very close by. As well as sights and attractions, there are plenty of small shops and restaurants along the way if you want a beer or a bite to eat. This is one of the most special places to visit in Aschaffenburg Germany.

Schöntal Park is in the city center, but a little further to the north-east, and offers a nice place to walk. As soon as you are in the park, you almost forget that you are in the middle of the city. If you walk through the park a few times you will enjoy the ponds, the trees, the animals and the fresh air. Like Schönbusch, the site was inspired by the English-style landscape and redesigned in 1777.

Schönbusch is considered to be the oldest English-style landscape park in Bavaria. Established in 1775, the park and royal palace were built in such a way that you can see as far as Johannisburg Castle.

Everything about the palace is meant to represent 18th-century life – and you can still see furniture from that period today. You can reach the park by following the “Kleine Schönbuschallee”, a more than 2 km long avenue of lime trees. This green path connects the park to the city center.

11. Museum of Jewish History and Culture

In Museum of Jewish History and Culture you can find historical documents such as photographs, newspaper reports and advertisements illustrate the eventful life of the Jewish community in Aschaffenburg, which was one of the largest in Bavaria.

Political developments and their consequences are presented using the example of local events. It also becomes clear how strongly Jewish citizens shaped economic and cultural life in the city.

Places to visit in Aschaffenburg Germany

Places to visit in Heidelberg Germany

Do you want to know which are the best places to visit in Heidelberg Germany, have a look at our article. Heidelberg is not...

Places to visit in Offenburg Germany

Have you ever asked which are the best places to visit in Offenburg Germany? In this article, you will explore the top 10 places...
- Advertisment -
Facebook
Instagram
Twitter