On the north shore of Lake Garda stands Riva del Garda, a place where the blue of the water and the sky, the green of the Mediterranean vegetation and the white of the beaches give life to a work of art.

Where is it: We are on the north shore of Lake Garda, 50 kilometers from Trento. Riva del Garda has about 17,000,000 inhabitants and is located just 65 meters above the sea. The town and its surroundings are so rich in olive trees, lemons and palm trees that it almost seems to be on the sea, but the mountains that surround it remind us that we are not far from the Trentino Dolomites.

How to get: Those arriving by car from the A22 Brenner motorway can exit at Rovereto Sud and follow for Lake Garda. Those traveling by train get off at the Rovereto station and from there can continue with the buses that connect with the lake and the village of Riva.

The village of Riva del Garda extends in the northernmost part of Lake Garda. Its historic center is full of narrow streets surmounted by the high Apponale tower, the symbol of Riva del Garda. The entire lakefront revolves around this center, surrounded by an orderly arrangement of the buildings which in the mid-nineteenth century transformed Riva into a sought-after European tourist destination.

Still today in the historic center of Riva del Garda the remains of the ancient walls that surrounded the village during the Middle Ages are still visible . A castle was built in the highest part of Riva, which was later replaced by a fortress overlooking the waters of Lake Garda. On the other hand, the circular Bastion, the Rocchetta , dates back to the Venetian period and still stands today in a predominant position with respect to the town of Riva del Garda.

Looking at Riva del Garda from a floor plan, the beautiful medieval fortress certainly stands out : the Rocca di Riva which rests on a sort of artificial island, bathed by Lake Garda. This fortress was built in 1124 with the aim of protecting the town of Riva from any attacks on the port, a nerve center for trade.

The Rocca has undergone several renovations over the years and has been devastated several times as a victim of clashes between different families. In the 1500s, when Riva del Garda was under the Habsburg rule, the Rocca became the residence of the court of the bishopric. In the nineteenth century it was transformed, however, into an army barracks. 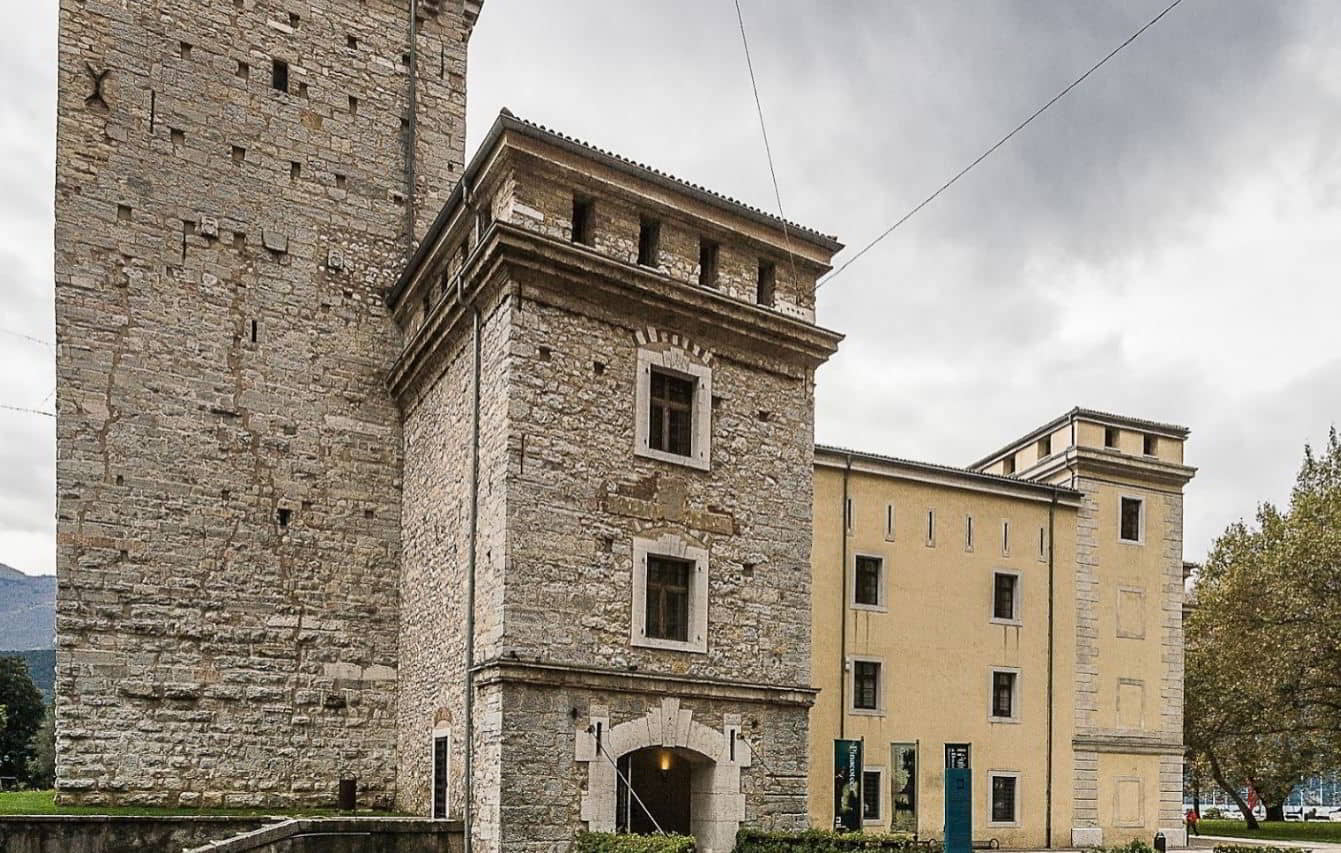 Today the Rocca di Riva houses the MAG, the Alto Garda Museum . Inside there are permanent sections, spaces for temporary exhibitions and spaces for carrying out various laboratory activities. The central courtyard of the Rocca, on the other hand, becomes a perfect stage for hosting shows and events that are held throughout the year in the beautiful Riva del Garda.

But let’s go back to MAG. The permanent sections of the Alto Garda Museum are the Pinacoteca, which houses paintings by 19th century painters such as Pietro Ricchi, Vincenzo Vela and Francesco Hayez, and the Archaeological Section , with finds belonging to the Copper Age. In the path dedicated to the history of Riva del Garda , the entire period of its denominations is covered.

These permanent sections are flanked by temporary exhibitions that take place throughout the year relating to both contemporary culture and landscape. To conclude the visit, we recommend going up to the Rocca tower, which offers an extraordinary view of the city of Riva and the whole of Lake Garda. For more information check official website. 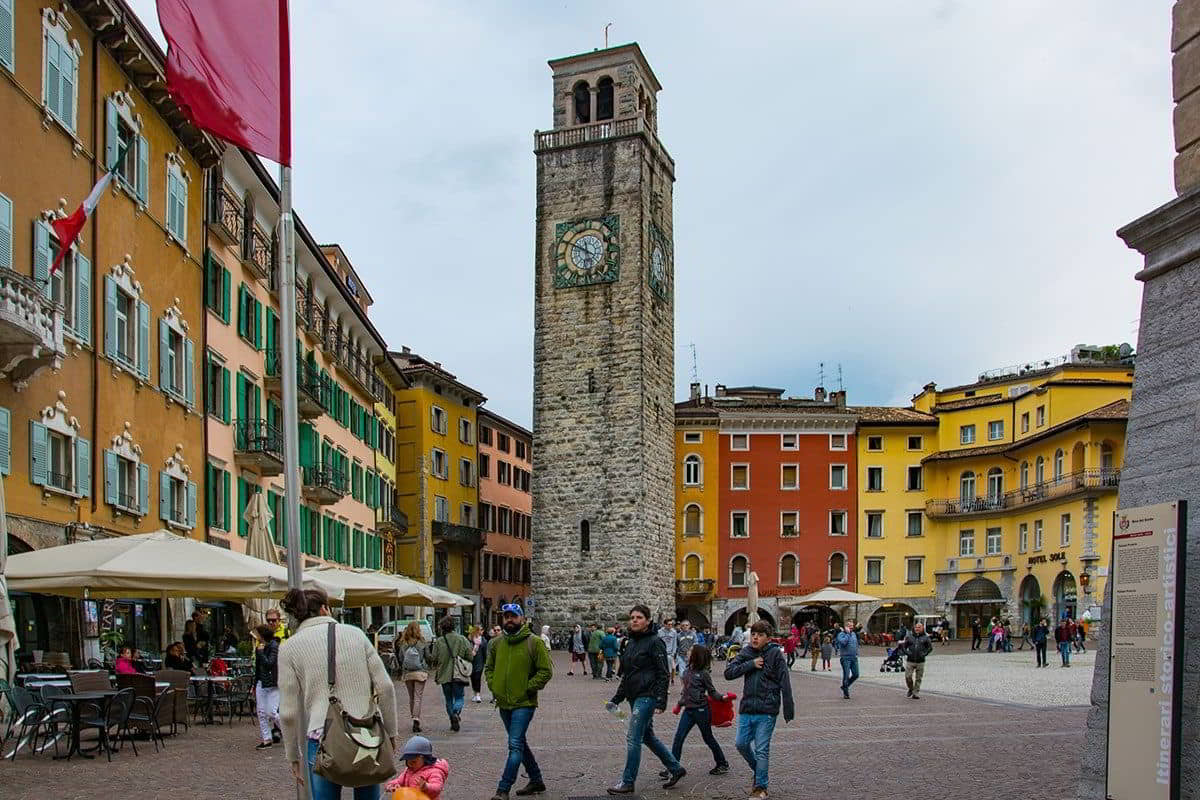 At one time under these arcades there were stalls for money changers, as well as numerous artisan shops selling various goods from the lake. Once again in Piazza III Novembre, the four most important fairs of Riva del Garda took place, as written in the ancient city statutes. The rest of the buildings are neatly arranged in an architecture that is typical of the Middle Ages. 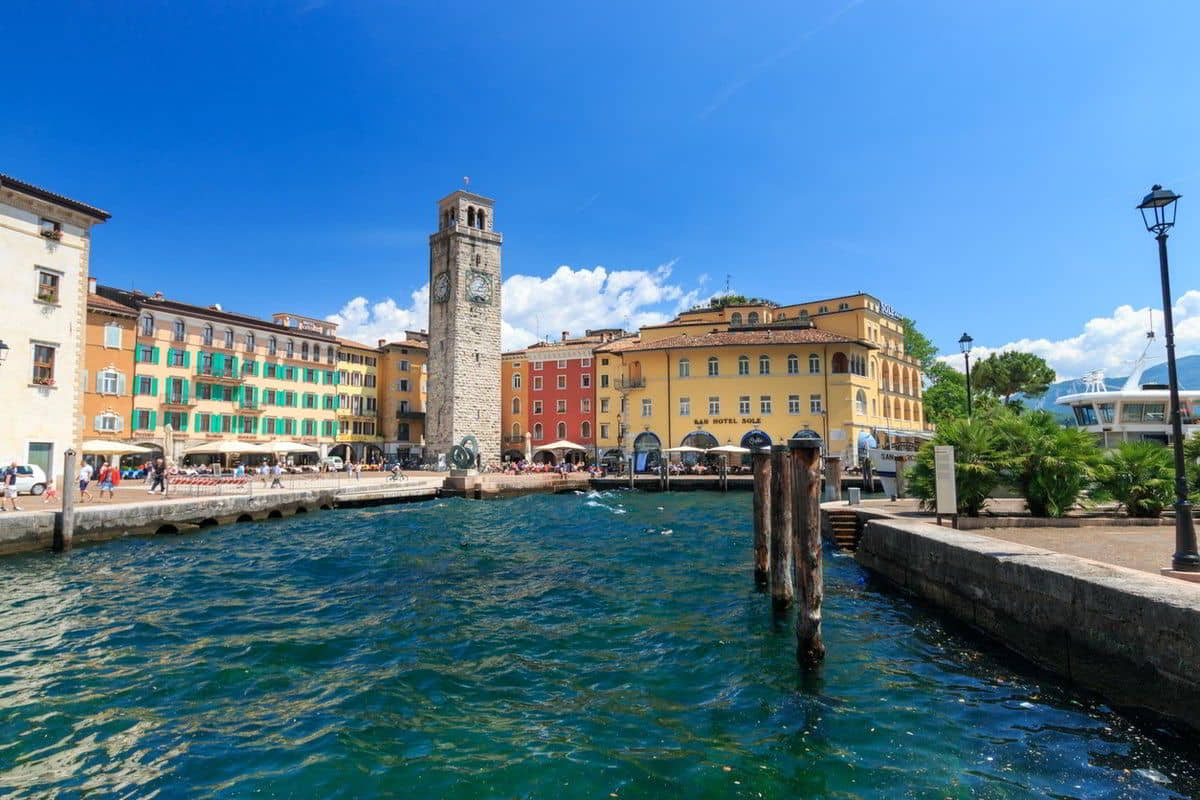 In Piazza III Novembre in Riva del Garda, there is also the Apponale Tower of 1200, the tower that dominated the port, so called because it is located near the landing of those coming from Ponale, a town opposite. In the event of a siege, the tower was a safe refuge thanks to its 8 meters high entrance and its thick walls. The Apponale tower is 34 meters high and also from here, the view of Riva del Garda is truly spectacular. You only need to climb 165 steps. On the top of the tower, looking up, you can also see the symbol of the city of Riva, that is a bronze angel, called “Anzolim”.

The cost of the ticket for admission to the Apponale Tower is € 2.00. Free for children under 15.

The religious center of Riva del Garda can be found in the large Piazza Cavour , in the center of the city, where the Church of Santa Maria Assunta stands out.

The Church as we see it today is of Baroque style, a makeover that took place in the 18th century. Inside we find a single nave and a single side chapel, or the chapel of the Suffrage. The altars, on the other hand, are different and on the back of the main one the large painting of the Assumption by Craffonara does not go unnoticed .

The Addolorata, placed in the fourth altar on the left, is also worth a look by the same artist. The bust of this artist can be found on display in the small Craffonara square, dedicated to him, just adjacent to Piazza Cavour.