SwitzerlandJuraWhat to do in Porrentruy Switzerland

Former residence of the prince-bishops of Basel, Porrentruy is distinguished by its imposing castle and its Refous tower, a former keep, overlooking the old town. With its cobbled streets and remarkable Baroque-style buildings, the city can easily be explored on foot with a guided tour or by following the Secret Circuit. 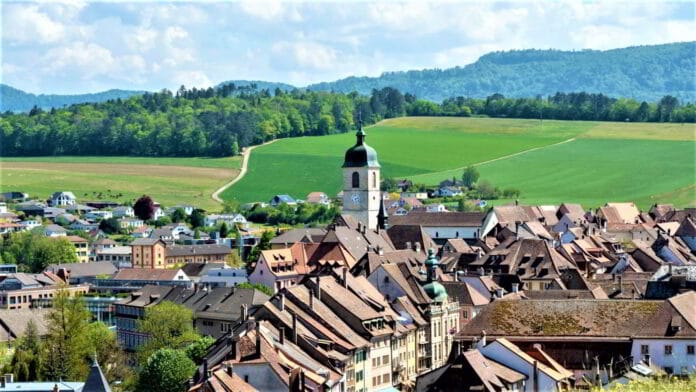 150 million years ago, the Jura was populated by dinosaurs. Located near the French border, Porrentruy is the second largest town in the Canton of Jura. Its old town, with many bourgeois houses in Gothic, Baroque and neo-classical style, is worth a visit. You can also admire monumental fountains, including that of the Samaritaine (1564) and that of the Banneret, also called the Swiss fountain (1518). Below you will find what to do in Porrentruy Switzerland.

What to do in Porrentruy

A universe, stories, adventure, located in an idyllic setting, the JURASSICA Museum in Porrentruy retraces the history of the Jura’s natural heritage. Rich and varied collections are presented there, including many marine fossils dating from the Jurassic but also surprising naturalized animals illustrating the regional biodiversity. A first-rate mineralogical collection completes the set.

Since the 13th century at least on the first buttress of the hill of Fahy, the castle overhangs in an impressive way all the old city. Residence of the Prince-Bishops of Basel from 1524 to 1792, it unfolds an architectural panorama that extends from the Middle Ages to the end of the 18th century . Even today, it remains a symbol of power since it houses the seat of justice in the Republic and Canton of Jura.

The Botanical Garden, nestled in a sumptuous setting, was created more than 2 centuries ago. This makes it the second oldest botanical garden in Switzerland, after Basel. Its space dedicated to Jura vegetation, its wooded park and its collections of irises and roses make it an ideal place for relaxation and contemplation. A veritable open-air museum, this space has some great surprises and discoveries in store for you.

At the origin of the creation of the Porrentruy Museum, Professor Gustave Amweg (1874-1944) was a great defender of the Jura heritage. He never ceased all his life to collect material evidence of the history of the Jura. In 1949, his collection of engravings and his library were acquired by the Municipality of Porrentruy.

Through this major purchase, a museum was effectively created, although a “Société du Musée de Porrentruy” had already been incorporated into a corporate association on September 24, 1945, thus carrying out a project dear to Gustave Amweg.

The expansion work of the Technical Division (DIVTEC) of the Jura Center for Education and Training (CEJEF) has led to the discovery of dinosaur footprints in Porrentruy. Valued sauropod and theropod tracks can be seen in the inner courtyard of the building, as are sketches of life-size dinosaurs.

Two clocks also allow visitors to better understand geological time (millions of years), compared to the precise measurement of time (milliseconds). It is one of the things listed as what to do in Porrentruy Switzerland.

The Banné hill, above Porrentruy, gave its name to a fossiliferous geological member called “Marnes du Banné” by Jules Thurmann. The richness in fossils of these marls is very appreciated by the public (scientists, students, schoolchildren and tourists) and allow easy discoveries of the incredible fauna of invertebrates which populated the Jurassic Sea nearly 152 million years ago.

Equipped with a badge, you explore different unusual places at the castle and in the old part of town. At some of them, light and sound productions illustrate historic events. The activity can also be booked with a guide. As the keeper of the keys, you open the doors to secret and unusual places in Porrentruy which are brought to life by stunning sound and light effects.

The former Maison Turberg, at 42 rue Pierre-Péquignat, a landmark monument in the old town of Porrentruy by its history, its architectural qualities and its importance in the built environment, has become a cultural place, in which optical art holds an important place.

Porrentruy OPtical Art (POPA) was created in November 2016 and aims to be a unique museum in Europe which aims to present a collection of optical art works to the population. A permanent exhibition provides insight into this important but often overlooked segment of contemporary art.

This town has more to offer and for this reason we listed best places to see in Zug. There is a lot to see...

In our opinion Saint Moritz is the perfect place to stay during winter holidays and for that reason we have listed Top 10 best...
- Advertisment -
Facebook
Instagram
Twitter