SwitzerlandBasel-LandschaftTop things to do in Arlesheim, Switzerland

Top things to do in Arlesheim, Switzerland 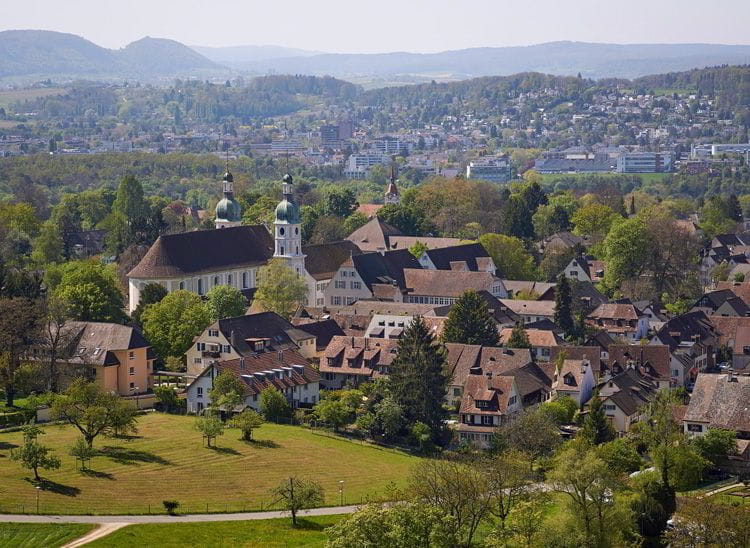 Top things to do in Arlesheim – Canton of Basel-Landschaft, Switzerland

Arlesheim is a town and a municipality in the district of Arlesheim in the canton of Basel-Country in Switzerland. Its cathedral chapter seat, bishop’s residence and cathedral (1681 / 1761) are listed as a heritage site of national significance.

The official language of Arlesheim is (the Swiss variety of Standard) German, while the main spoken language is the local variant of the Alemannic Swiss German dialect.

The cathedral has a Baroque organ built by the German builder Johann Andreas Silbermann, based in Alsace, in 1761. The instrument was restored by Metzler in 1959–1962, and is an example of the fusion of French and German organ building styles.

It has been used in several recordings, including Lionel Rogg’s recording of the complete organ works of J. S. Bach, for Harmonia Mundi France in 1970. 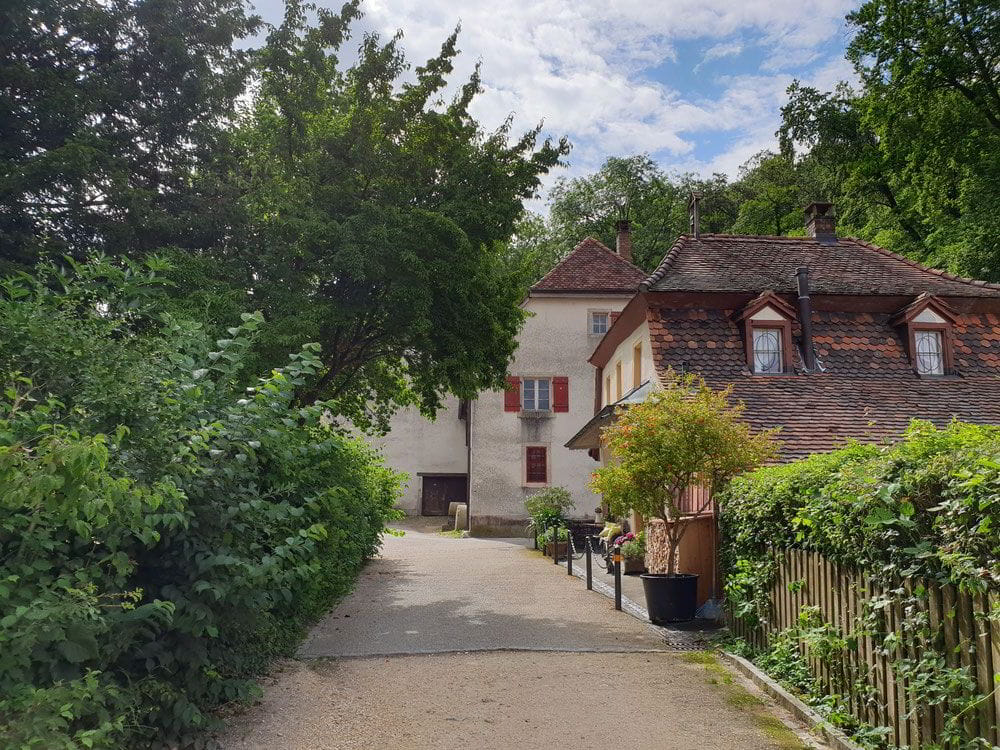 The Ermitage monument landscape includes the English landscape garden, the Birseck palace complex, the mill complex and the forest houses.

The Hermitage in Arlesheim is located at the western foot of the Gempenplateau, which as part of the Table Jura pushes against the Rhine plain and opens up into a small valley above the Birs. 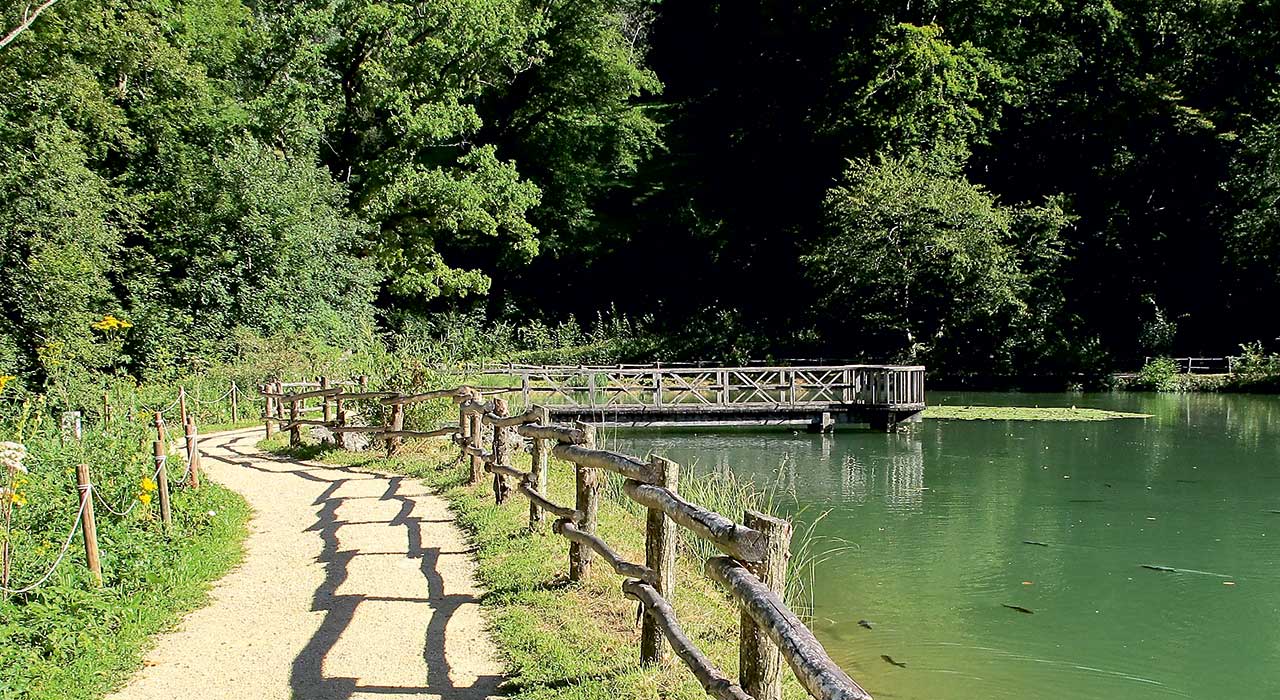 It is known that the Ermitage zu Arlesheim, the largest English landscape garden in Switzerland, was opened in 1785 and that the initiators or creators of the complex Balbina von Andlau-Staal, wife of the bishop of Birseck, and her cousin, Canon Heinrich von Ligertz, were. At that time, Arlesheim was the residence of the Basel cathedral chapter in the prince-bishopric of Basel and belonged to the German Empire, so that the Reformed city of Basel, only two miles away, cannot be thought of. 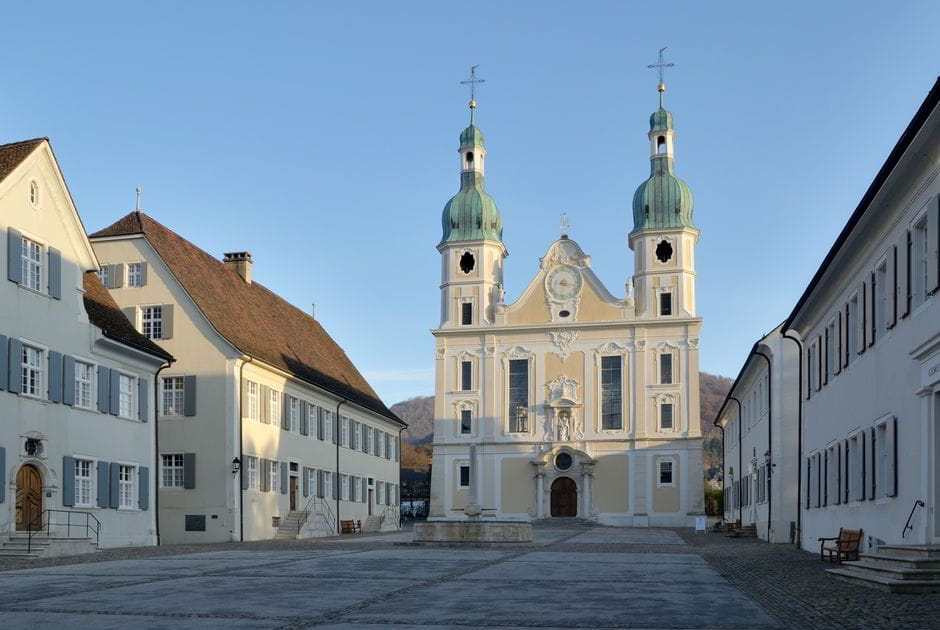 The baroque Arlesheim Cathedral impresses with its impressive architecture and its famous Silbermann organ. It is the only cathedral in Switzerland and the symbol of Arlesheim. The famous Arlesheim Cathedral was consecrated in 1681. Church services and other parish events are still held in the cathedral today. Let yourself be inspired by the beautiful architecture and listen to the wonderful sounds of the last still playable Silbermann organ in Switzerland when you visit the cathedral. 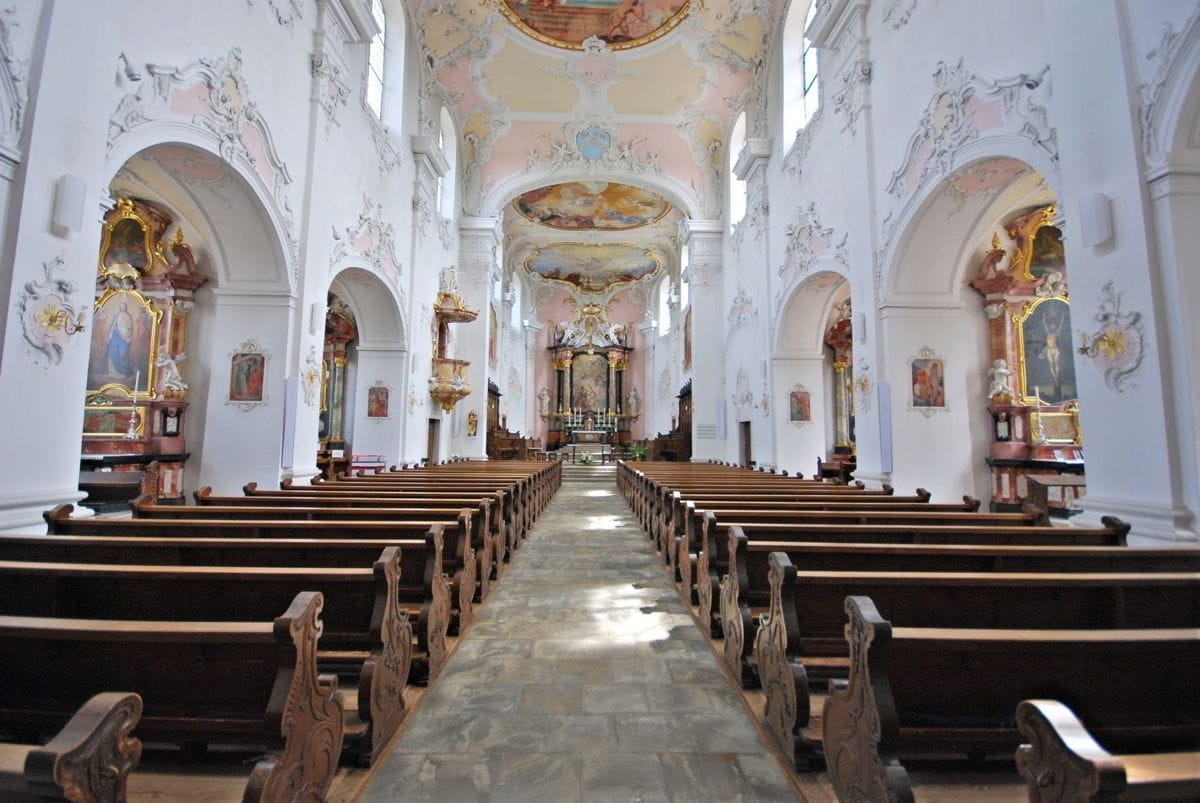 Concerts and guided tours are also offered regularly in the cathedral. The cathedral is located in the middle of Arlesheim and can be seen from afar. It is located directly on the busy cathedral square and there are various shops and restaurants around it.

Ermitage Arlesheim is the largest English landscaped garden in Switzerland. Natural elements such as the romantic Gobenmattal and the motte with its caves and grottoes are incorporated in the estate.

The old buildings such as the Birseck castle ruins and the mill, the tobacco press and the gunsmith, are also important features of the romantic garden. The three ponds were previously used for farming fish. With its system of paths, vantage points, squares, small buildings and monuments, a clever use of trees and shrubs, as well as the creation of sight lines, this more natural, yet highly structured garden, was created at the end of the 18th century. 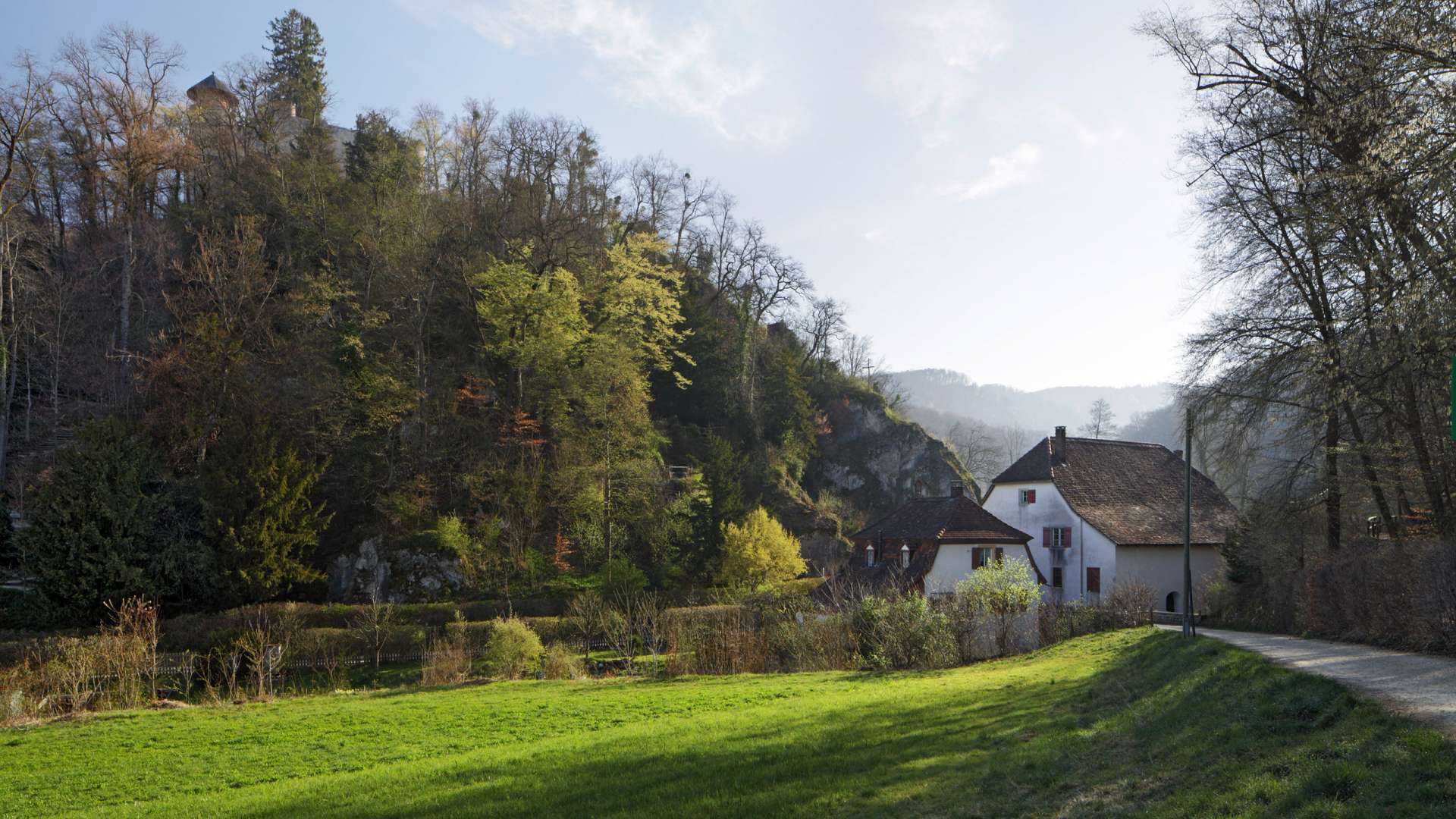 Significant parts of this have been able to be maintained until the present day. A walk through the garden produces many different impressions and moods and creates associations of legends, of living in an age of piety and stories of knights in shining armour. These are provided by the Apollo grotto and the Persephone grotto, the hermit’s forest cell and its chapel and the castle ruins of Birseck with parapets and battlements. 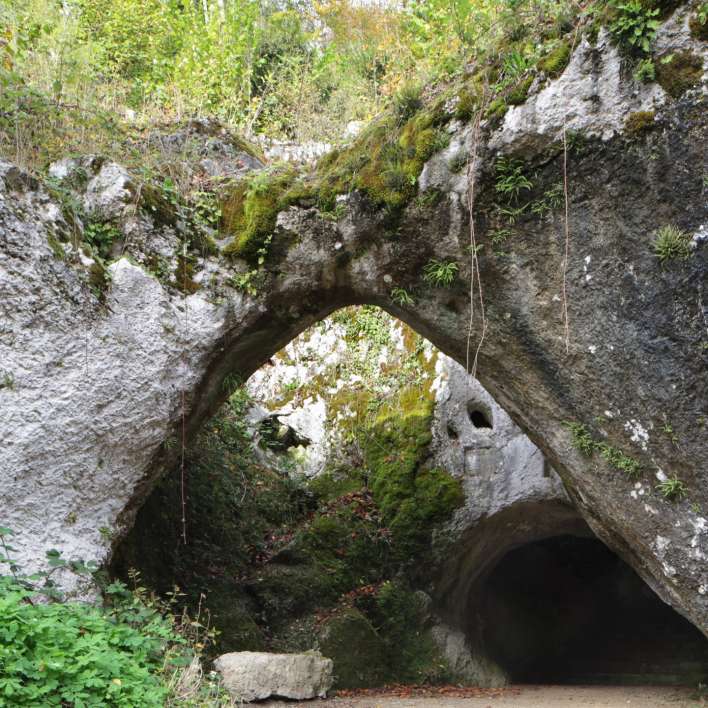 In 1789 this distinctive stone gate with its waterfall and two caves became the entrance to the gardens. Naturally the distinctive rock face had been seen from the beginning as the most suitable entrance, however it was being used by Joseph Stöcklin, the miller, as pigsty, manure heap and timber yard, and he was unwilling to stop using it.

He only did this eventually on the personal command of the Duke-Bishop. Carved into the rock face are the words NATURA AMICIS SUIS, which means NATURE FOR HER FRIENDS. To the left of the inscription flowed a little creek, which was partly visible through the rock and kept flowing openly. 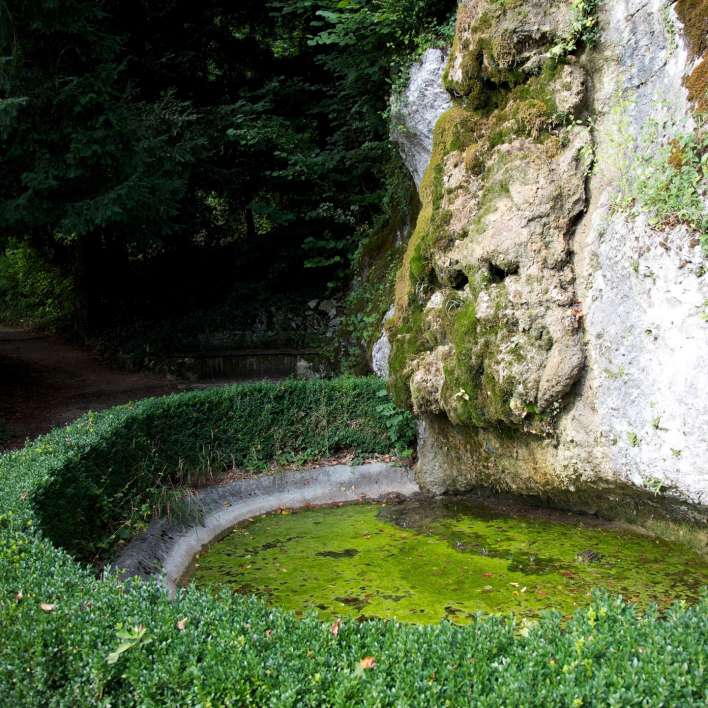 When the Ermitage was first opened, this was the entrance to the garden. An atmospheric garden scene with a gushing waterfall and a semicircular bench, which invites you to linger. Water is a central element which appears in several variations in the Ermitage.

Whether it tumbles down a waterfall, runs down a stalactite, stands in the pond or flows in a creek, the reflection of the water is next to the designed elements of the garden, and always shows a reflection of nature and its beholders. With a bit of luck, in the springtime you can see even still today discover a salamander or a newt. 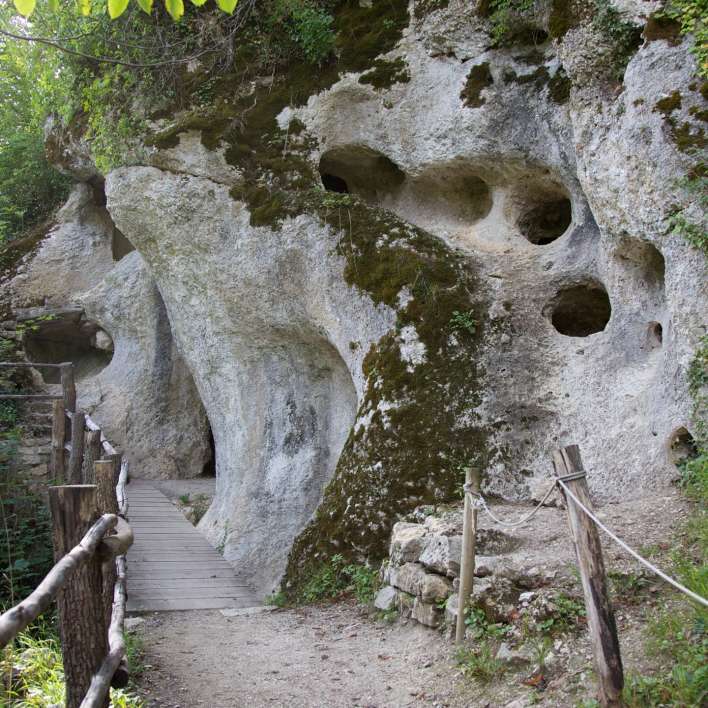 A pathway built into the stone leads through the fissured rock. The caves and cleaves in the rock reminded the gardeners of the most important place of worship in antiquity, the Temple of Apollo in Delphi, the legendary place of prophecy.

Formerly a wooden lyre adorned a crevice, inscribed with the phrase “Apollini Sanctum” (the Temple of Apollo). Apollo was the Greek god of light, spring, moral purity, healing, prophecy and art. A suspension bridge once ran alongside the rock walls. 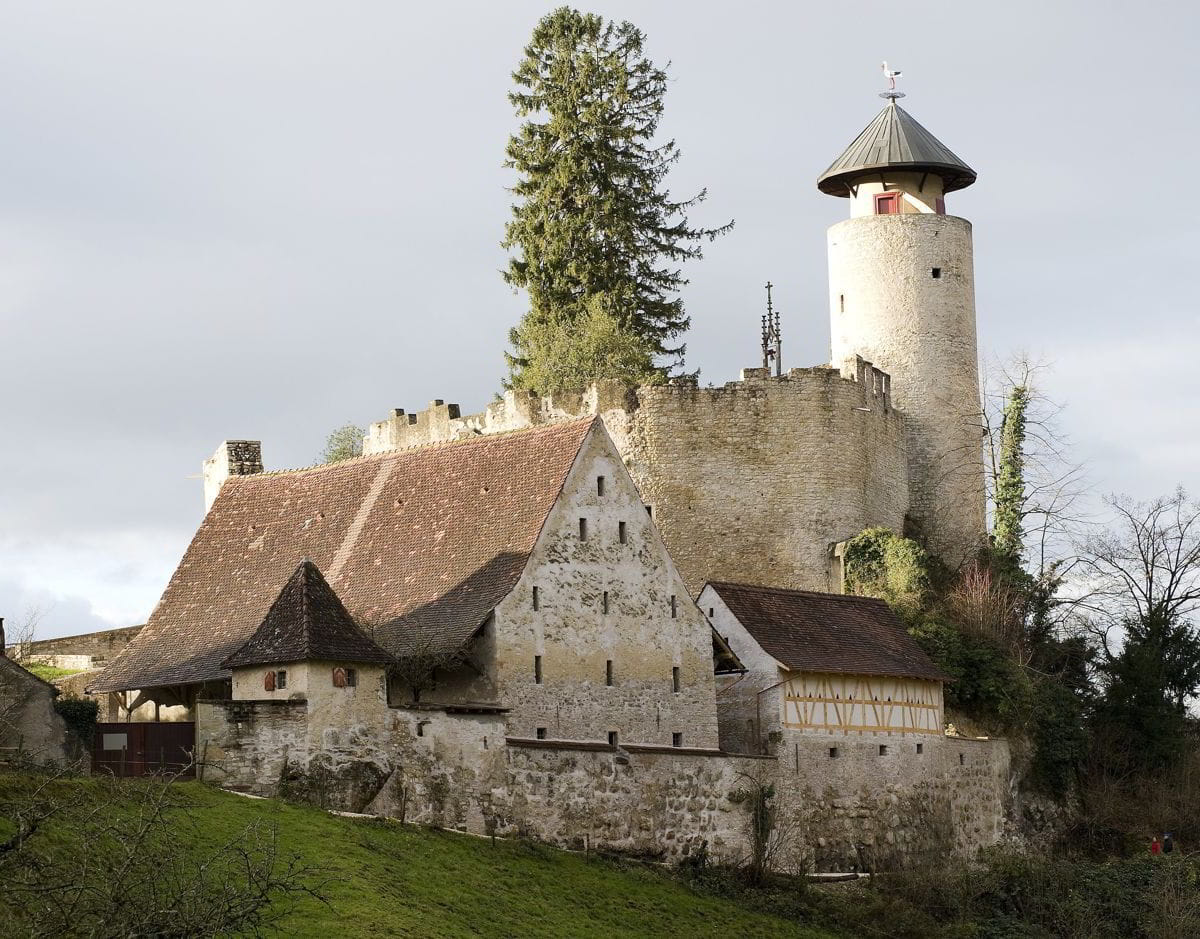 In 1785 the dilapidated castle served as scenery for the landscape garden. It was destroyed in the revolutionary turmoil, and the ruin was integrated into the garden after 1812. During the restoration of the Ermitage the ruins of Birseck Castle served as a replacement for the former artificial tower ruins, and becomes a new attraction. 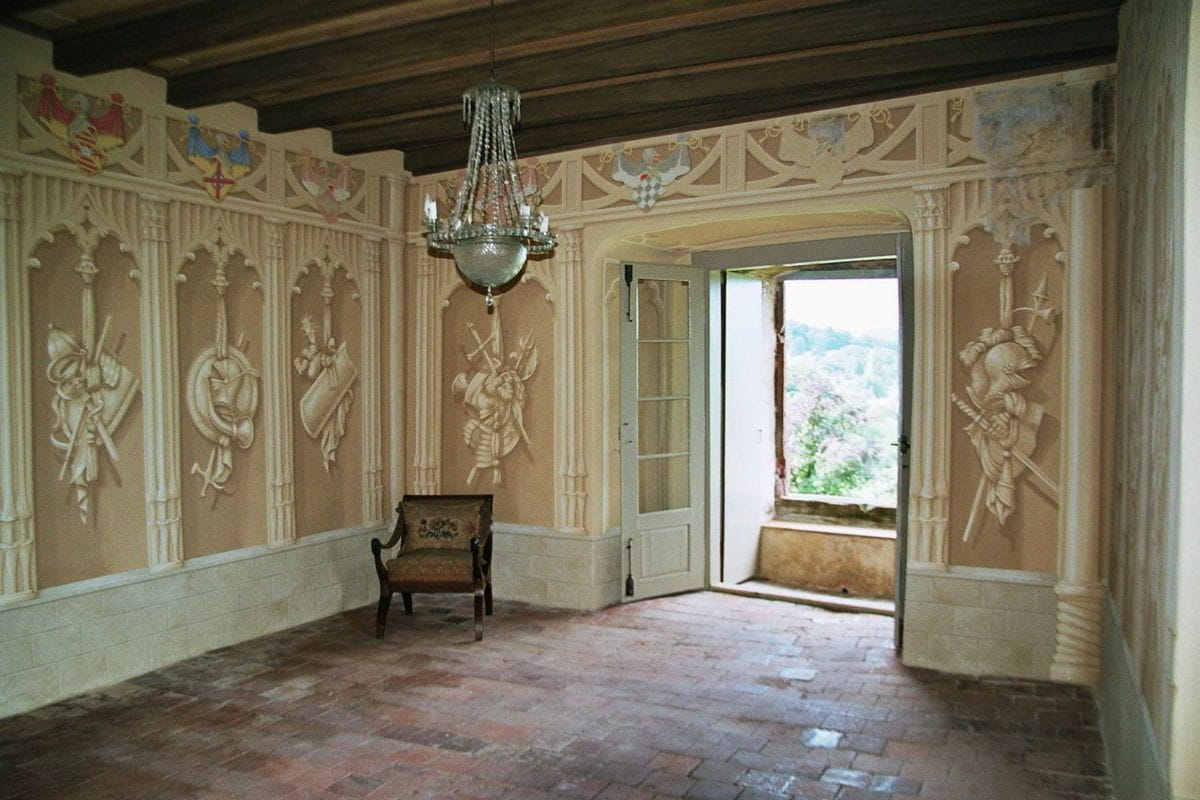 A circular tower, a small chapel with neo-gothic wall paintings, and the courtyard with hedges, trees and roses all invoke romanticised thoughts of the age of chivalry and invite you to a dreamy stroll through the castle.

In 1812 a Knights’ Hall with neo-gothic wall decorations was built into the ruins. These wall paintings were restored in 2007 directly from the original artworks and Birseck Castle was renovated.