SpainGaliciaThings to see in Pontevedra Spain

Things to see in Pontevedra Spain

In this article we are going write about best things to see in Pontevedra Spain. Pontevedra is situated in Galicia region in Spain. Keep reading and don’t miss a thing!

Pontevedra “gives drink to what happens”, is a Galacian saying that expresses very well the essence of this city: hospitality.

Pontevedra is a magical and welcoming city located in the heart of Galicia, in the Rias Baixas.

The first thing that most catches the visitor’s attention is that almost no cars circulate in the center of Pontevedra, only those in charge of the distribution of goods or those who live in the center.

There are few cities in Spain that are more pleasant to walk through their center, free of cars, smoke, and full of cafes. In this article, we are listing the best things to see in Pontevedra Spain.

1. Chapel of the Pilgrim Virgin of Pontevedra (That’s one of the best things to see in Pontevedra)

Chapel of the Pilgrim Virgin of Pontevdera was built in 1778 according to plans by Antonio de Souto with the collaboration of Bernardo José de Mier.

It combines typical formulas of the late Baroque with already neoclassical suggestions.
Its plant is inspired by a scallop, the symbol par excellence of pilgrims, within which a cross is inscribed.

The main altarpiece, neoclassical, was drawn up in 1789 by Melchor de Prado, with variations carried out by his brother Manuel and Juan Pernas Gambino.

Very curious is the holy water basin, nothing less than a mollusk shell brought from the Pacific by Méndez Núñez.

The main façade, the work of Antón Souto, is preceded by a simple atrium with a staircase, surrounded by a balustrade with pinnacles.

The façade houses the image of La Peregrina (19th century), patron saint of the province of Pontevedra, in a niche.

Highlight the stone fountain located at the foot of the stairs of the main portal.

Of course that Chapel of the Pilgrim Virgin of Pontevedra is one of the best things to see in Pontevedra Spain.

2.Ferreria square (That’s one of the best things to do in Pontevedra) 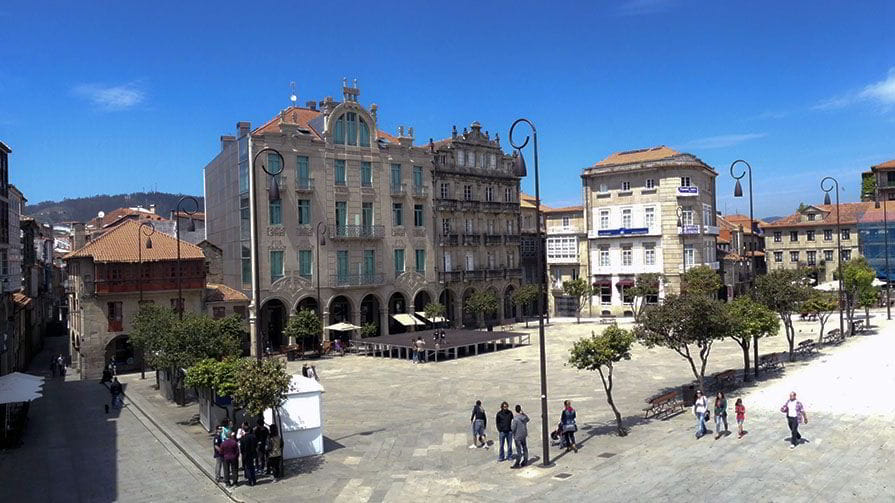 The Plaza da Ferrería is undoubtedly one of the most emblematic, popular and beloved squares in Pontevedra.

It is a meeting place, cultural events or games for children and where there are some of the best terraces in the city.

This entire complex is dominated by the powerful presence of two religious buildings:

San Francisco and the Santuario de la Peregrina, as well as by a set of stone buildings, some of them supported, of great harmony.

3.Basilica and Convent of San Francisco

Basilica and Convent of San Francisco was built almost entirely in the 14th century, this Franciscan convent church is a masterpiece of the art of the mendicant orders who came to the city at the time of its first splendor.

According to tradition, the convent was founded by Francisco de Asís, who stopped in Pontevedra while doing the Portuguese route of the Camino de Santiago.

The church is of late Gothic or ogival style, and was declared a historical-artistic monument in 1896. It has a Latin cross plan, with a single nave, a transept, a wooden roof and headboards with three polygonal apses, covered with ribbed vaults. Location

This old theater combines decorative aspects of two theaters of the XIX century with an interior with a more current and modern conditioning.

This is a cultural space belonging to the Council of Pontevedra, which offers a wide and varied cultural offer throughout the year.

Teatro Principal is located in the city center, in the historic center of Pontevedra, which allows a social and cultural integration that is not always crowded.

Built in 1842 on a vella igrexa de San Bartolomé, it was rebuilt logo dun serious fire.

Basilica of Saint Mary Major is the best example of religious architecture from all over the city.

Built in the 16th century at the initiative of the Gremio de Mareantes, a late Gothic or Renaissance building.

Chea de lendas, as stones on its façade contain representations as singular as a view of the city in stone or a saint with anteollos.

Basilica of Saint Mary Major is an example of religious architecture from all over the city.

If you are in Galicia region take a trip to Pontevedra and visit Basilica of Saint Mary Major. because is one of the best things to see in Pontevedra.

6.The Museum of Manuel Torres

The museum has a wide collection of this renowned painter, born in Marín in 1901, and different rooms that host temporary exhibitions.

His extensive career covers almost all disciplines and trends: landscapes, still lifes, portraits and engravings, along with a large number of pencil, ink and sculpture drawings.

The rest of the museum rooms hold temporary exhibitions of contemporary plastic artists and crafts.

Based on the works of Celso García de la Riega, there are numerous studies that certify a Columbus family linked to the sea, and to Moureira, the maritime trade district of Pontevedra where the Santa María flagship was built, baptized “La Gallega” .

This family of Italian origin settled in Porto Santo, where the Cristóbal Colón House Museum stands today, a modern building and two restored houses that were owned by the Colón family in the Middle Ages that show a journey on the theory of the Galician Columbus.

8.The Burgo Bridge (That’s one of the best things to see in Pontevedra)

One of the most representative monuments of the town hall is the Puente del Burgo, it is represented on its shield.

The bridge that we have today is from medieval times, in particular, it could be classified in the Late Middle Ages, with subsequent restorations. The last one in 1992 made by the “Ponte do Burgo” Workshop School.

If you are in Galicia region take a trip to Pontevedra and visit The Burgo Bridge because is one of the best things to do in Pontevedra.

The ruins of Santo de Domingo de Pontevedra are the remains of the Gothic church of the old Santo Domingo.

It was built by the Dominicans in the 13th century. Its interior houses elements of high artistic and historical value:
Sarcophagi and graves of figures such as the knight Tristán of Montenegro and a large collection of heraldic shields of the old Galician nobility.

It is one of the headquarters of the Pontevedra Museum. The Dominicans arrived in Pontevedra at the end of the 12th century and began the construction of this Gothic temple in the 13th century.

10.The Convent of St. Clare

A church of the convent was built in the second goal of two years XIV, is of Gothic style with an important set of baroque altarpieces.

In 1730 fíxose or main altarpiece, in the Churrigueresque style. Not inside the convent, we can cram a beautiful cloister with a xardín in the shape of a cross, a cross, and a fountain similar to that of Ferraría. Of course, the Monastery of Santa Clara is one of the best things to see in Pontevedra.

Things to see in Pontevedra Spain