SwitzerlandSolothurnPlaces to visit in Solothurn Switzerland

Places to visit in Solothurn Switzerland

Places to visit in Solothurn – Canton of Solothurn, Switzerland

Solothurn is a small and charming city located on the Aare River, which spoils its guests with the unique culture combination of Italian, French and German styles. Solothurn has earned its name of “Ambassador Town” for being the residence of the French king’s ambassadors during the 16th–18th centuries. 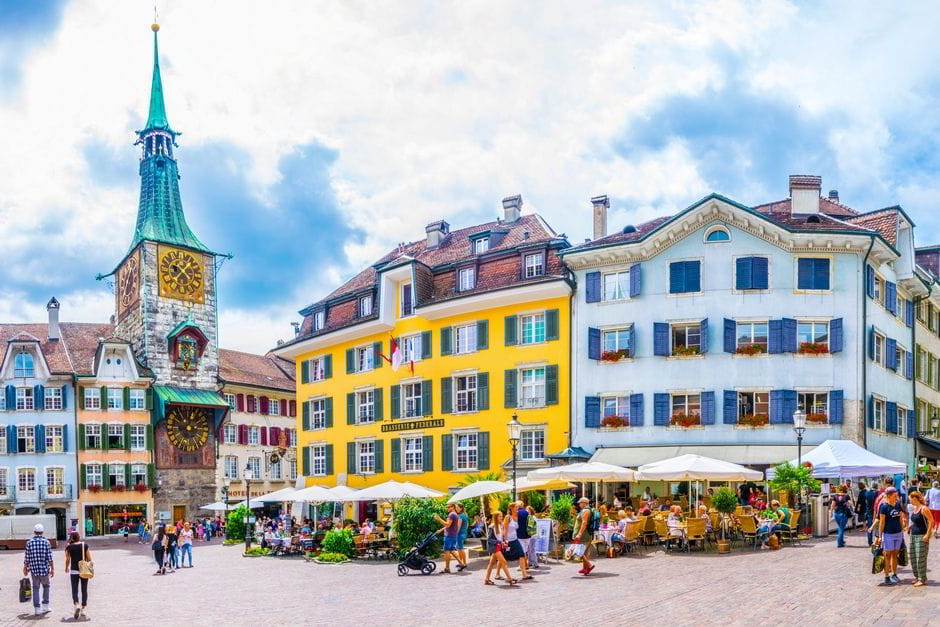 The impressive Baroque and Renaissance buildings, as well as many religious centers distinguish this car-free old city. Also, make it a great place to stroll and enjoy the magnificent views. This idyllic Baroque architecture in Solothurn is among the finest examples in Switzerland.

An interesting thing to remember about the city is the number eleven. As within the Old City, you will find eleven chapels and churches, eleven historic fountains and towers. 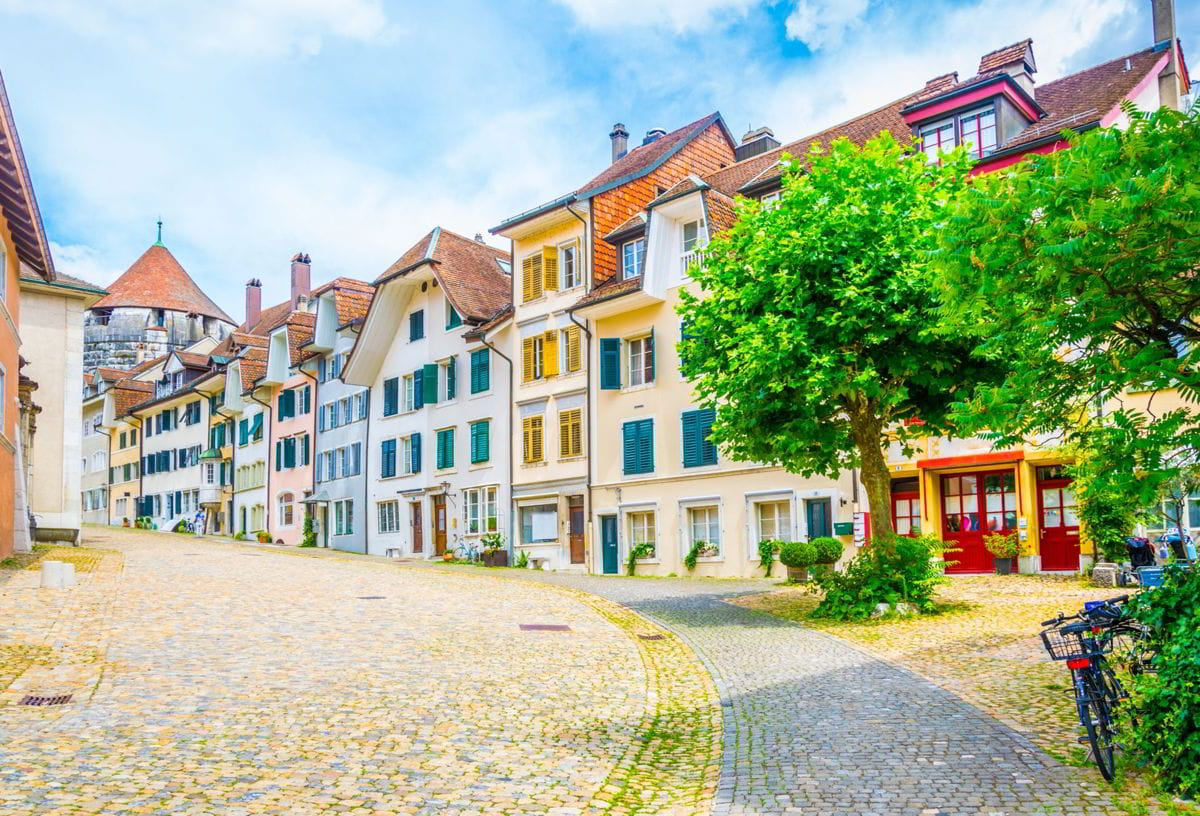 However, the most wondering piece is the clock with only eleven hours on it. The secret behind this number is that Solothurn was the eleventh canton to join the Swiss Confederation.

The masterpiece here is the St. Ursus Cathedral, which is the main hallmark and tourist attraction in Solothurn that took eleven years to build. Below you can find Top 11 Places to visit in Solothurn Switzerland.

Places to visit in Solothurn 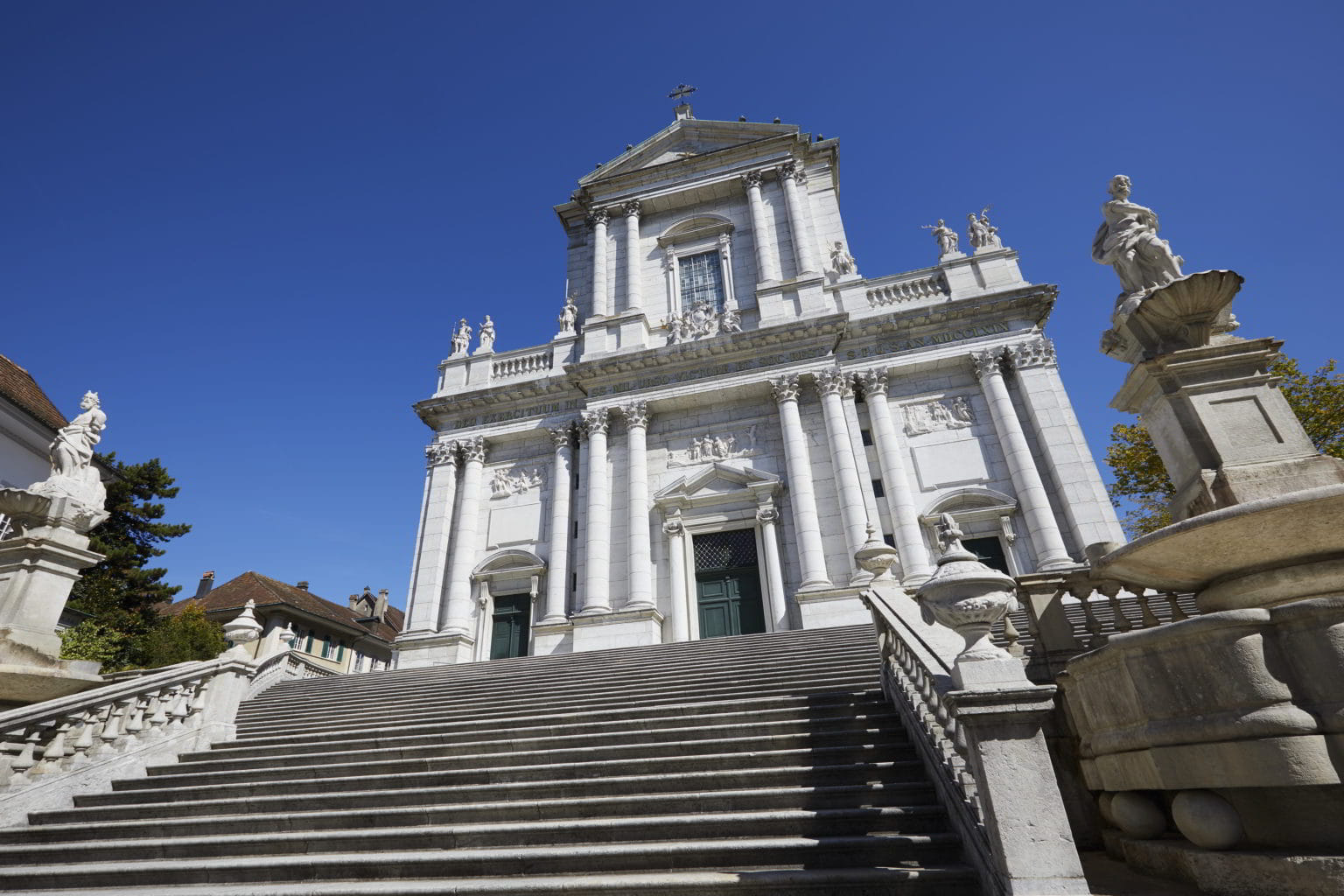 The St. Ursen Cathedral is considered to be the most important Swiss building of early classicism and was built in light “Solothurn marble”. The cathedral is also considered a masterpiece of the “magical elf”. The imposing staircase leads up to the cathedral in three eleven steps. Inside there are eleven altars and the tower is six times eleven meters high and has eleven bells.

The third completely new building at this point took place from 1762 to 1773 according to plans by Gaetano Matteo Pisoni from Ascona and lasted exactly 11 years. His nephew, Paolo Antonio Pisoni, directed the construction in the later stages. Eleven bells from the Kaiser foundry in Solothurn (1764 – 1768) hang behind large sound openings. High altar in sarcophagus form by Carlo Luca Pozzi. 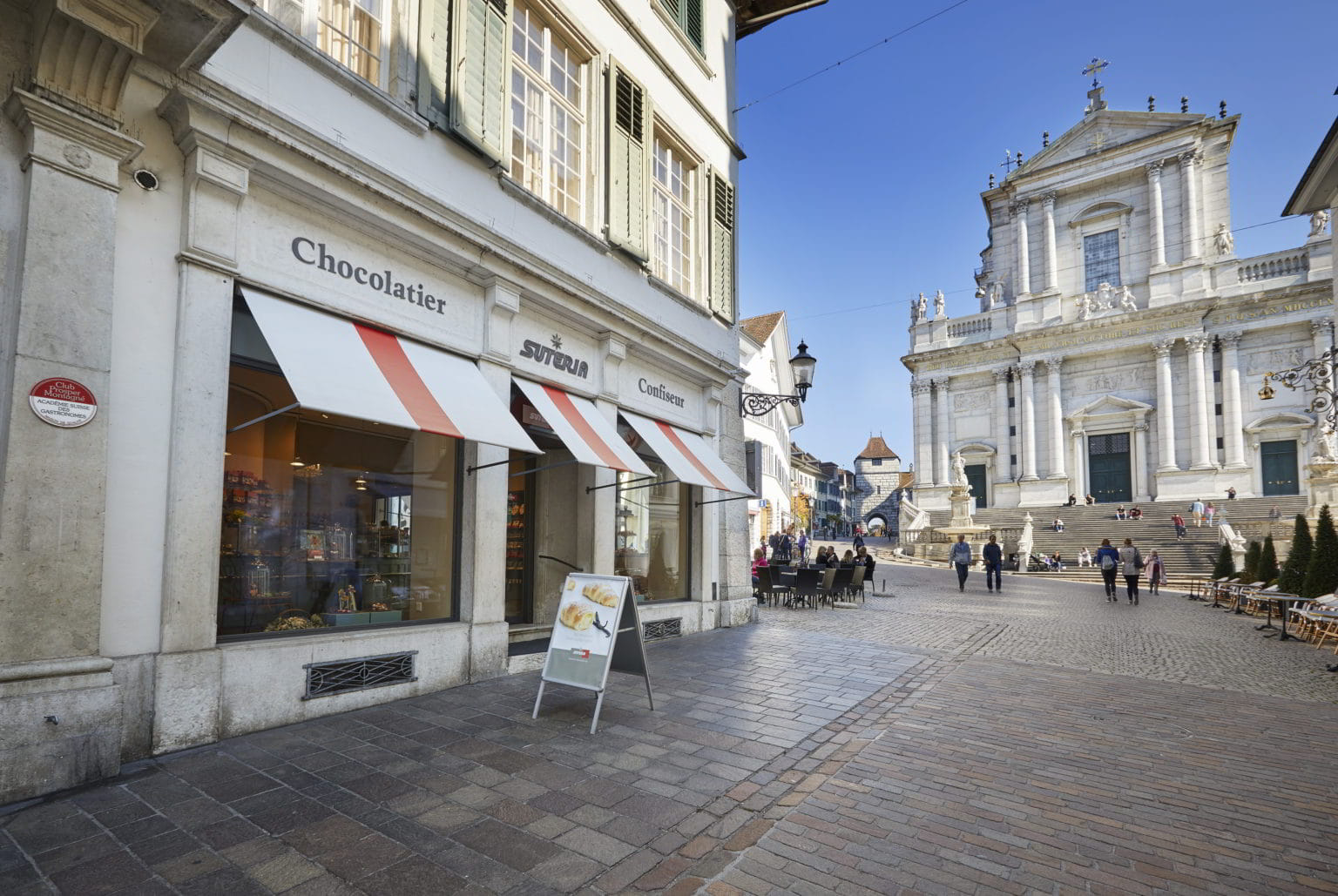 The cathedral treasure is housed on the ground floor of the tower. The extensive cathedral treasures include the Hornbach sacramentary, a statue of the Virgin Mary and a manuscript that was created around 983 in the Reichenau monastery. St. Ursen Cathedral is one of the best places to visit in Solothurn.

The facade with the imposing outside staircase is impressive. The 66 meter high onion dome, which was inhabited by a tower guard for a long time, can be climbed from Easter to All Saints’ Day in good weather and offers a good view of the old town and the Aare.

2.Tower of St. Ursus Cathedral (That’s one of the best places to visit in Solothurn) 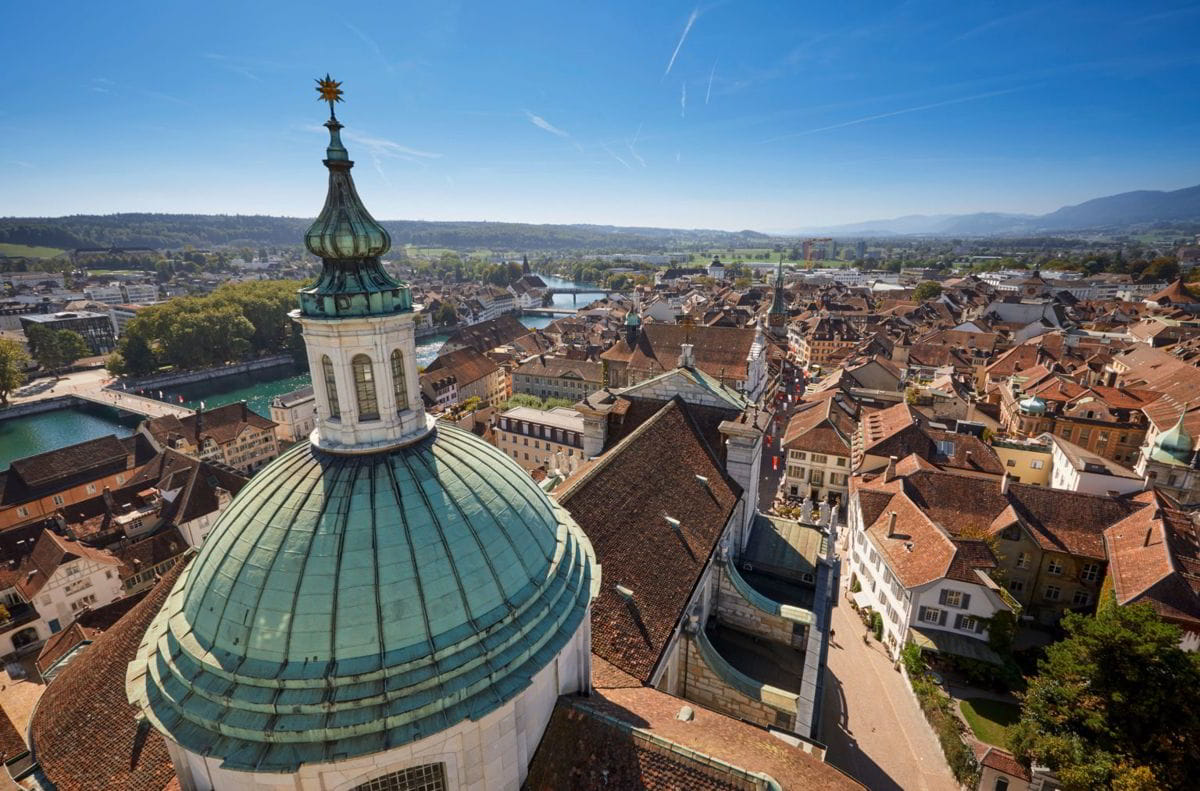 The steeple is 66 metres tall and well worth the 249-step climb to the top to enjoy the breathtaking views of the city, the surrounding area and the mountains.

Information
The list below contains more information about the Cathedral of St. Ursus and the tower opening times.

3.Church of the Jesuits Solothurn 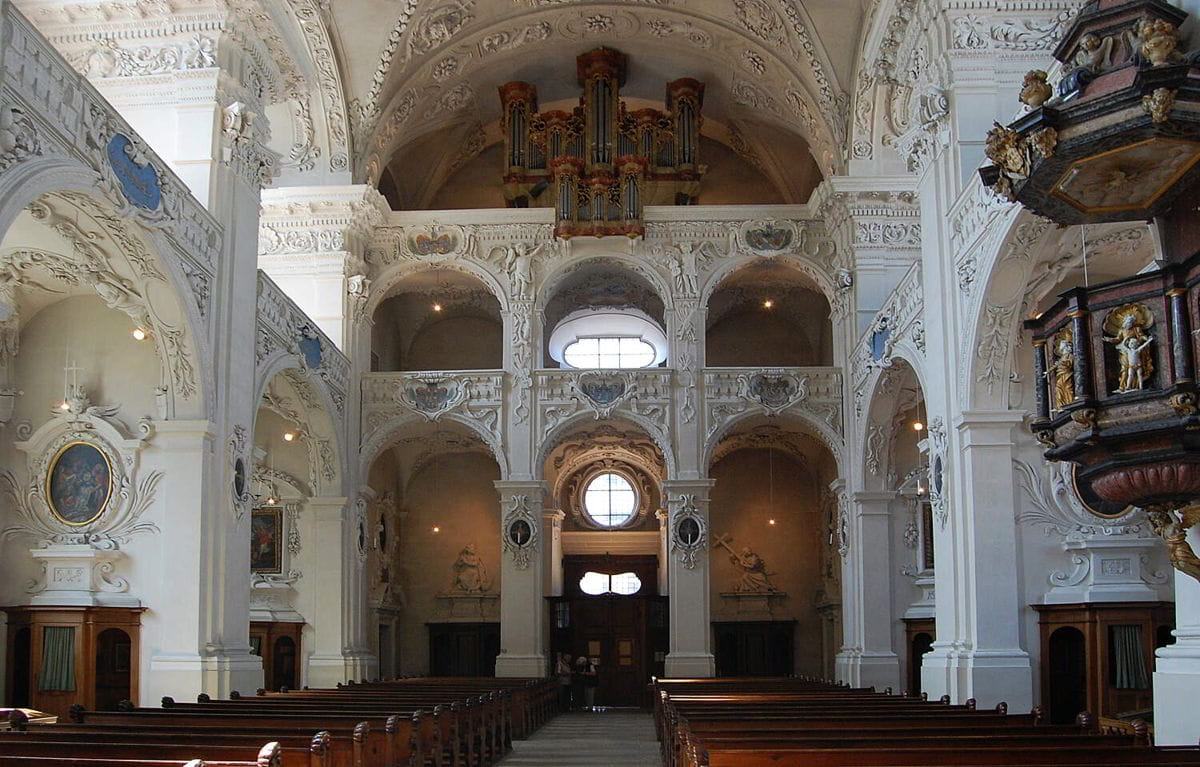 The Jesuit Church is thought to be one of the best examples of baroque architecture in Switzerland. It was built between 1680 and 1689 according to the principles of the master builders of the Vorarlberg region. It is designed as a unified baroque space and features incredible Italian-style stucco. The high altar is made of marbled wood and shows an image of the Assumption of Mary by Franz Carl Stauder.

The 11 churches and chapels of Solothurn are well worth a visit. The impressive St. Ursus Cathedral is a significant landmark. The Jesuit Church is thought to be one of the most beautiful baroque buildings in Switzerland, and St. Peter’s Chapel features post-gothic design with lancet windows and a chancel closed on three sides. Book a guided tour now to find out about the city’s churches.

The Jesuit Church can be hired for services from the Roman Catholic Church.

At Christmastime, the Church of the Jesuits is home to the Ambassadors’ Crib nativity scene, which is the only one of its kind in Switzerland.

4.Burristurm (That’s one of the best places to visit in Solothurn) 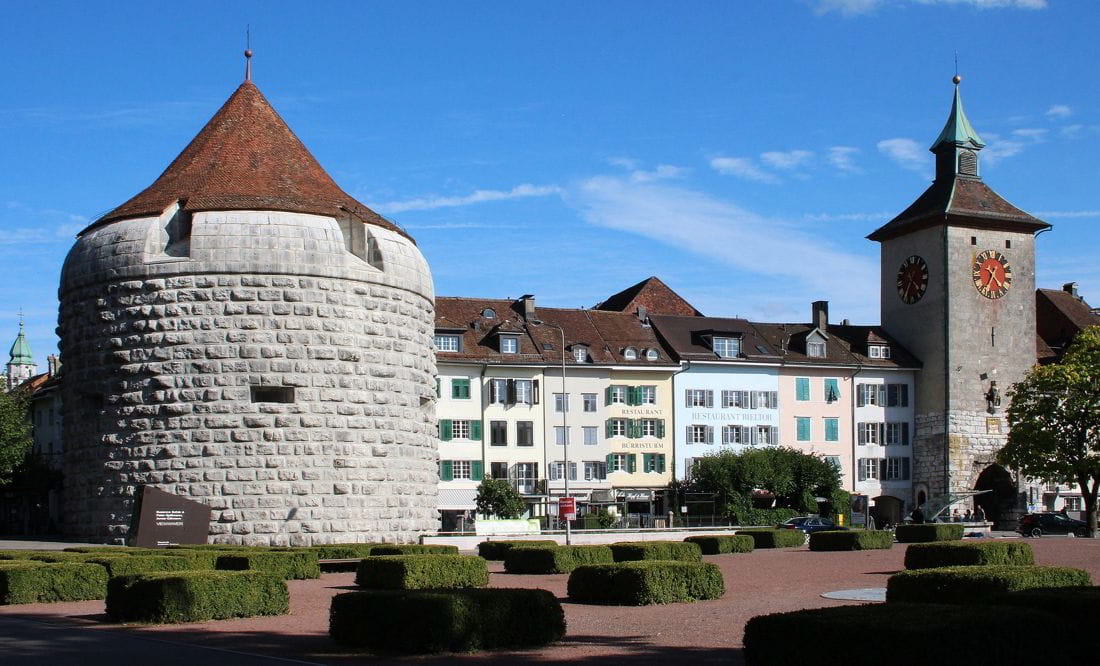 The old walls of the Burristurm, built in 1543, have been the scene of art and culture since the 1970s. At first, the tower only served as a stage venue and as a springboard for first appearances. But the project, which at that time was still called “Kleintheater Muttiturm”, soon grew into a popular cabaret.

Burristurm  is one of the best places to visit in Solothurn. Today the Burristurm is known under the name Kulturm and forms an important part of the Solothurn cultural scene on four spatially flexible levels with different types of events.

A well-known master builder from Solothurn received a special order. He was supposed to build the western tower of the suburban fortifications. He should be the guardroom and be able to withstand the floods of the Aare.

The builder was annoyed that the carpentry work was entrusted to a young master carpenter. Because he had a relationship with his daughter. But he didn’t want to talk her out of this. Another idea occurred to him how to annoy the young man. 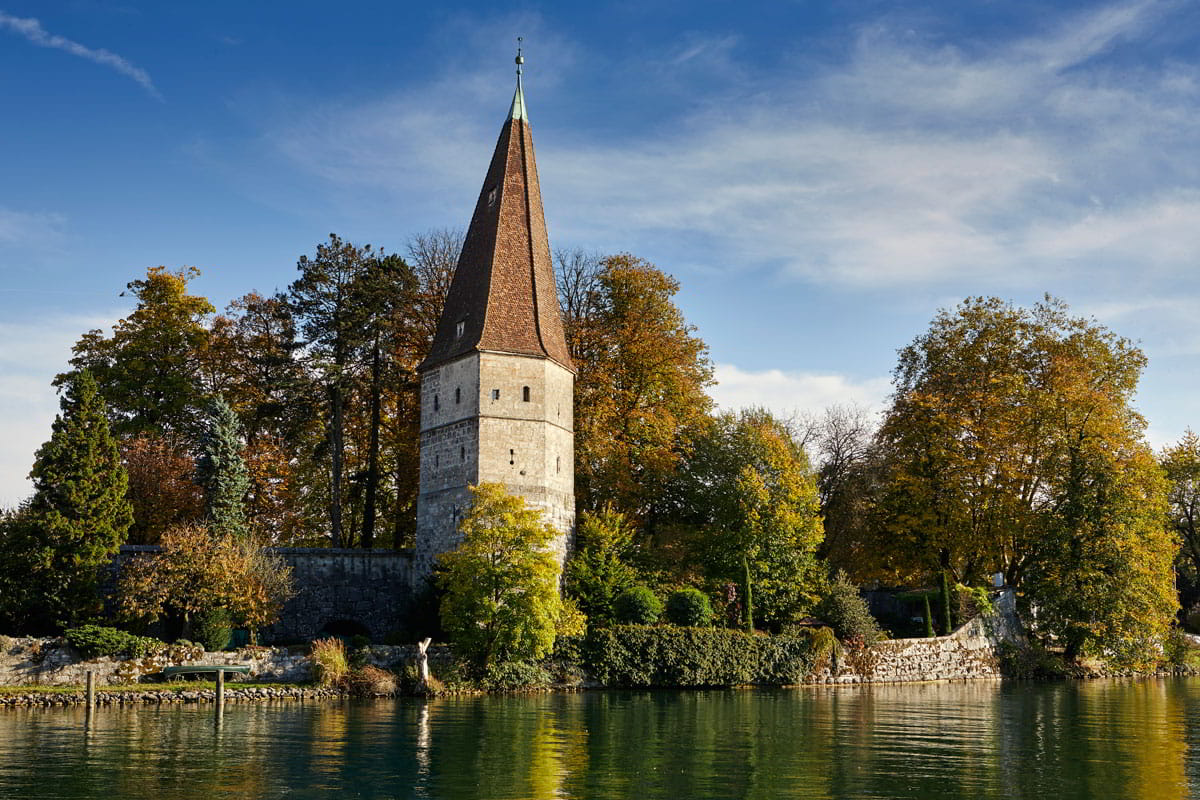 So built the planned tower in such a way that it had five unequal corner angles. He promised the craftsman his daughter’s hand as soon as he was finished. The task presented him with challenges. In order not to delay the construction, he started construction, although the planning was still missing.

His attempts failed. The craftsman threw himself into the Aare and died.The malicious builder was locked in the tower dungeon as a punishment. Years later the tower was completed by another master carpenter.

6. Maretplatz (That’s one of the best places to visit in Solothurn) 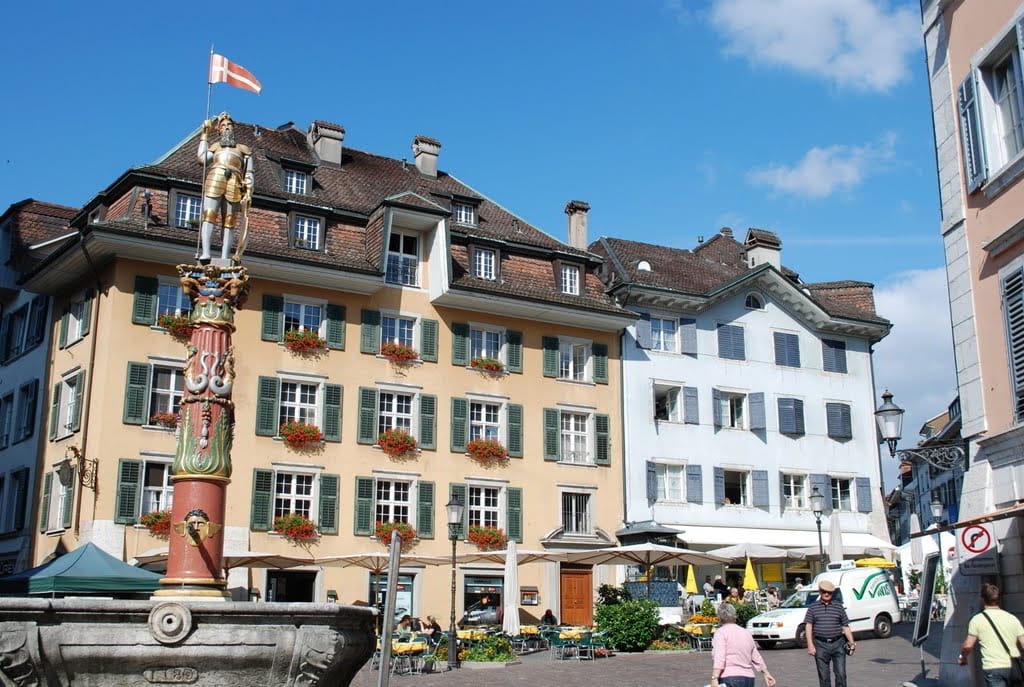 In the Middle Ages, the marketplace was of great importance. A place where news was exchanged and food was bought. Anyone who visits “Märetplatz” in Solothurn’s old town today will still experience a lively exchange: a beautiful fusion of history and modern zeitgeist.

The clock tower can also be admired on the market square and the market takes place every Wednesday and Saturday. Märetplatz is one of the best places to visit in Solothurn. 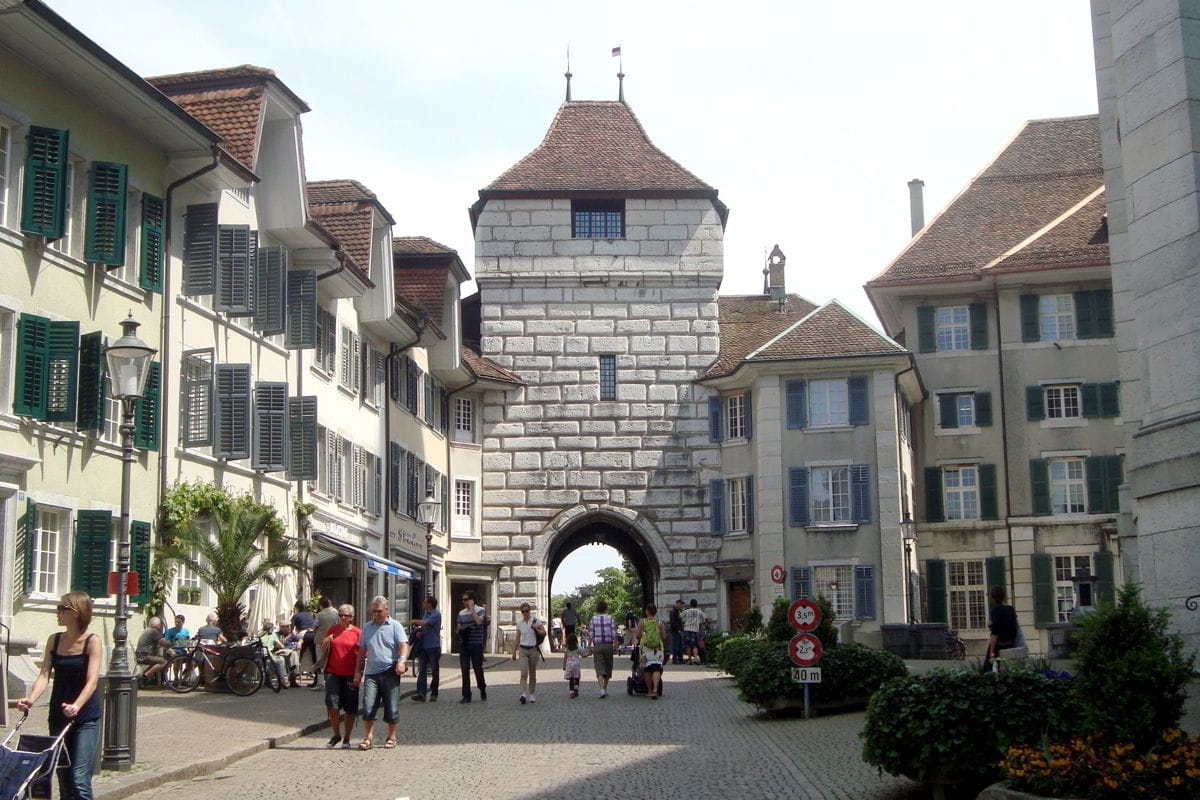 The Basel Gate is a masterpiece of fortification at the city’s eastern entrance. We admired the Basel Gate during our walking tour of the city. After the Swabian War, master builder Hans Gibelin replaced the oakwood gate with the Basel Gate made of Solothurn stone (Jura limestone) in 1504. Together with St.Ursus’ Tower, the Basel Gate forms a magnificent architectural ensemble. 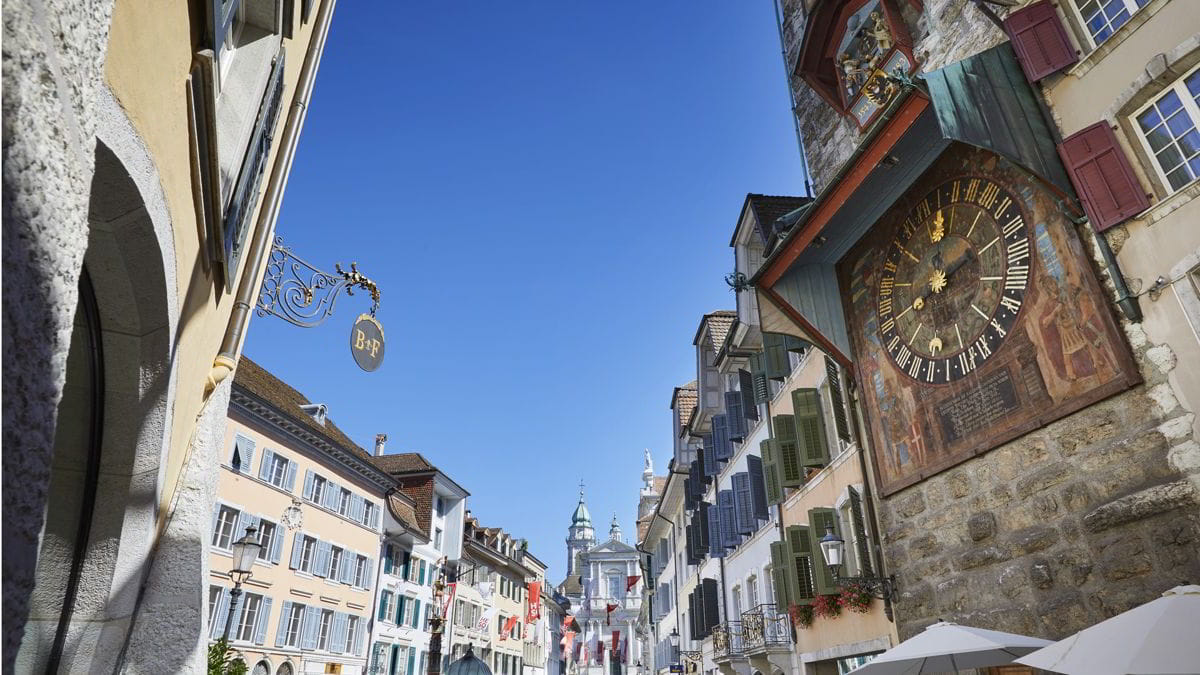 The city’s oldest building was constructed in the early 13th century. The bell ringer in the tower strikes the bell with a large hammer. Beneath the little canopy, the three symbolic figures of the knight, the king and the skeleton perform every hour.

The large astronomical clock was built by Lorenz Liechti and Joachim Habrecht in 1545, and displays the day, the month and the year. To the east is an extraordinary street view showing the Jesuit Church and the facade of St. Ursus Cathedral. 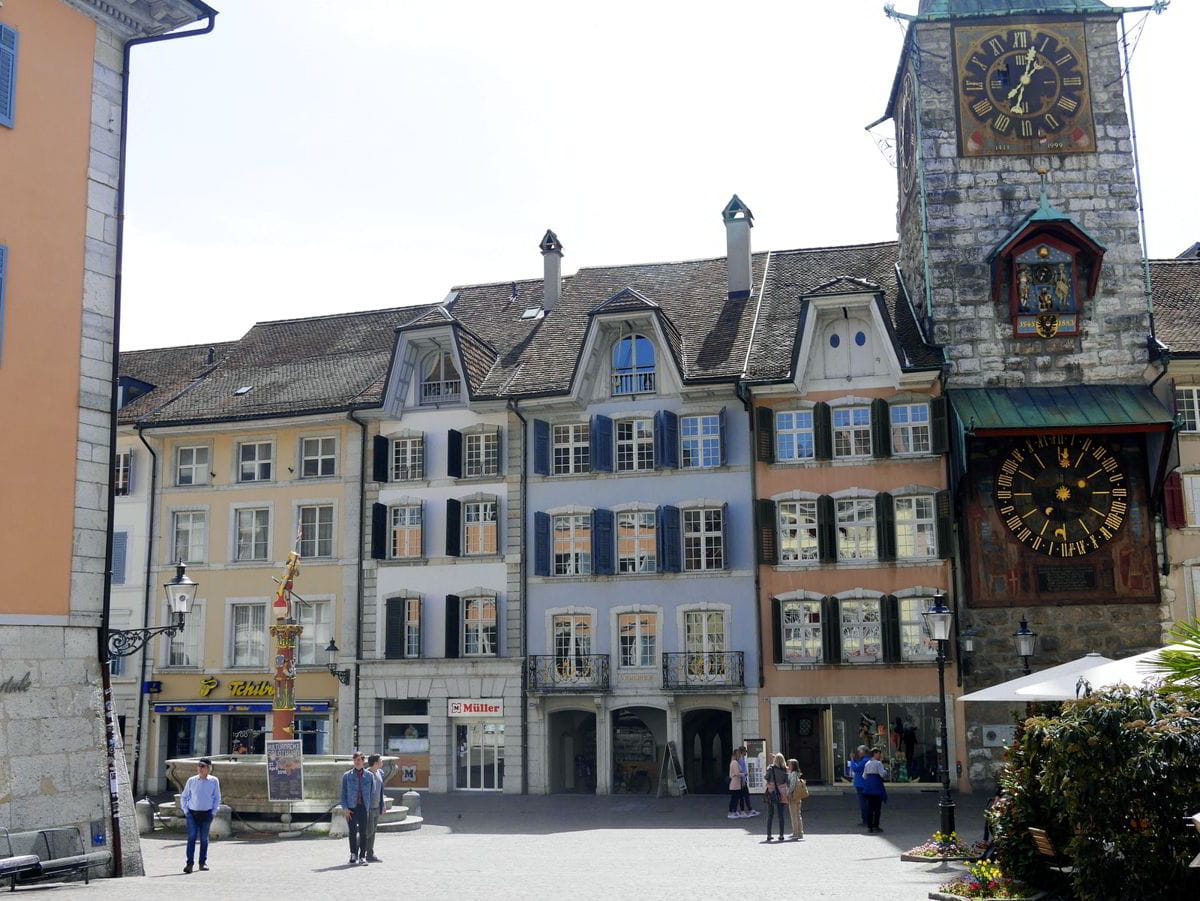 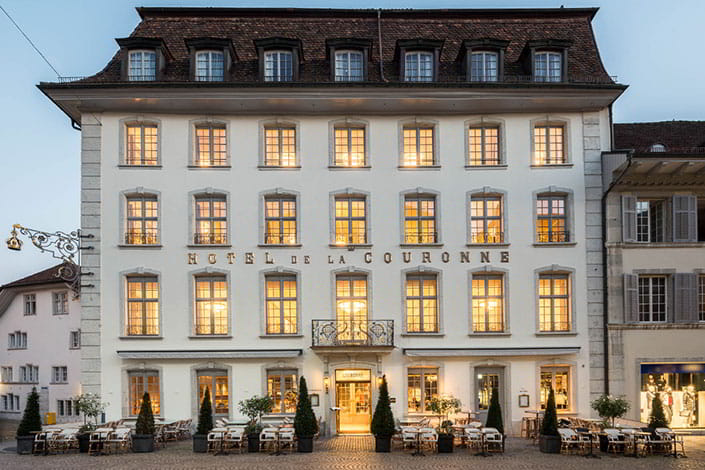 The banqueting hall and Baroque knight’s hall are perfect for special occasions. Host is the local Genossenschaft Baseltor, which offers contemporary gastronomy in historic houses. 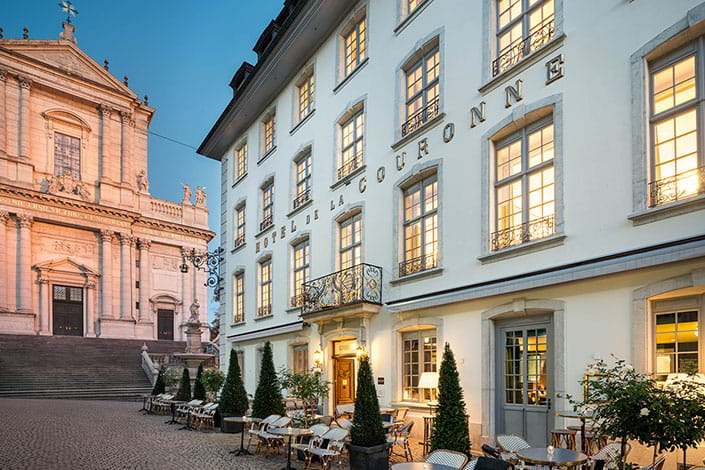 10. The Kunstmuseum (That’s one of the best places to visit in Solothurn)

Solothurn’s Kunsthaus, or Art Museum is a beautiful old building on the outskirts of the city. It boasts some very valuable work including pieces by Klimt, Hans Holbein the Younger, Vincent van Gogh, Henri Matisse and Ferdinand Hodler. 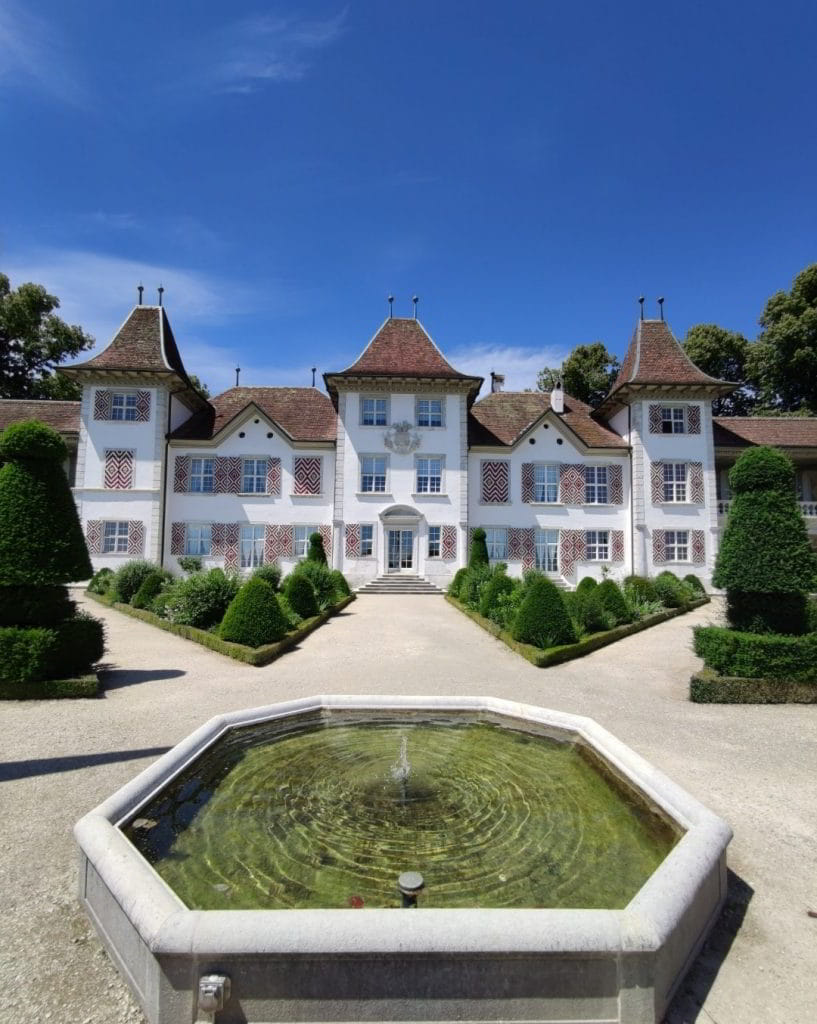 A short 10 minute drive away in Feldegg is the stunning baroque Waldegg Castle and gardens. It looks a little like a French chateau transposed into Switzerland and it is beautifully designed. Waldegg Castle – Schloss Waldegg near Solothurn.

Inside there are some very impressive 18th and 19th century interiors with paintings relating to the Family Besenval, whose Summer residence it was. It is a Swiss heritage site of national significance and definitely worth a visit. You can also book a guided tour of the house and gardens. For more information visit the website here.