Our bloggers have listed the places to visit in Olbia in Sardinia. The city is surrounded by suggestive hills and overlooks a beautiful gulf inside which are the islands of Tavolara and Molara.

In the streets of the center there are several Sardinian handicraft shops and restaurants where you can also taste the typical products of Sardinian cuisine. It is the gateway to the north-east of Sardinia, an ancient and thriving city will welcome you, a sought-after holiday destination, overlooking a gulf of infinite attractions. Olbia is a beautiful city with many amazing places to visit.

The surroundings of Olbia offer a large number of possibilities for boat excursions and day trips, by car or on foot. Below we have listed 11 most beautiful places to visit in Oblia Sardinia:

1. Basilica of San Simplicio (That’s one of the best places to visit in Olbia)

Among the rare examples of Sardinian Romanesque in Gallura, the Basilica of San Simplicio in Olbia was erected on the site of an ancient pagan temple and a necropolis, where in 304 d. C. the patron saint of the city was martyred.

Almost completely made of granite, the building with three naves, divided by arches resting on columns, was erected between the end of the eleventh century and the beginning of the twelfth at the behest of the Judges of Gallura.

On the islet of Peddone, in the historic center of Olbia, a stone’s throw from the Town Hall and the port, is the Archaeological Museum, a building that recalls the lines of a moored ship, the circular windows.

The suspended walkways have the same purpose, inside which there are important finds concerning the history of the city and the largest number of ancient ships in Italy.

3. Parish Church of San Paolo Apostolo (That’s one of the best places to visit in Olbia)

The beautiful dome covered with polychrome majolica of the Church of San Paolo Apostolo stands out in the highest part of the historic center of Olbia. And of course one of the most interesting places to visit in Olbia.

The building, a typical example of Gallura architecture, was probably built during the late Middle Ages on the site of an ancient Roman temple most likely dedicated to Hercules and in fact in 1989, during some excavations, the remains were found under the apse of the Hellenistic period.

A mysterious and emblematic place, recommended for those who want to explore the fascinating world of Nuragic civilizations in Sardinia, is the Sacred Well of Sa Testa.

Located in the homonymous hamlet along the SP82 state road, it can be reached in just 15 minutes by car from the center of Olbia; once the car is parked you will have to walk a short path in the green.

Leaving the Basilica of San Simplicio, look in the parking lot near the entrance to the Roman Necropolis. It is a complex of more than 400 tombs dating from 200 BC to 300 AD and furnishings that were found during the excavation work for the redevelopment of the area adjacent to the basilica.

Another obligatory stop on a tour of the Nuragic civilizations in Olbia and its surroundings is the Nuraghe Riu Mulinu in Cabu Abbas, a town about 4 km from the center of Olbia.

It is a stone construction dating back to around 1200-1300 BC, consisting of a central tower surrounded by a wall. There are two entrances. Located on top of a hill 250 meters above sea level, this nuraghe dominates the Gulf of Olbia and it is therefore likely that it was built with a defensive function, to control the arrival of ships; according to another theory it was built as a place of worship.

Another beautiful viewpoint a few kilometers from the center of Olbia is the Pedres Castle . Perched on an 89 meters high hill covered with dense vegetation, the castle seems to emerge suddenly from the greenery.

Unfortunately what we see are only ruins, but it is still a suggestive sight. It was built between the end of the thirteenth century and the beginning of the fourteenth century with a defensive function and was initially equipped with four towers and a double wall of which little remains today.

Located 3 km from Pittolungu and characterized by shallow waters and small rocks that emerge from the water. This is considered as one of the most beautiful places to visit in Oblia Sardinia Italy.

It is less than ten kilometers from the center of Olbia : its proximity to the city, the quantity of services it offers and its beauty make it the favorite beach of the inhabitants of Olbia.

Mingle with them for long afternoons of idleness lying on a very fine light-colored sand, bathed by the crystalline sea that has made the north coast of Sardinia famous all over the world.

10. The Porto Istana (That’s one of the best places to visit in Olbia)

If your are planning to travel during summer vacations, Porto Istana is one of the best places to visit in Olbia.

The Porto Beach commonly understood is a strip of very soft white sand a few hundred meters long and narrow. Although many consider it to be a single beach, in reality there are four each marked with a number.

They are characterized by shallow sandy bottoms that slope gently and generally calm waters; due to its position at the foot of the promontory, the bay on which the beaches of Porto Istana lie are rather sheltered from winds and currents. These are therefore safe beaches , also suitable for families with children. 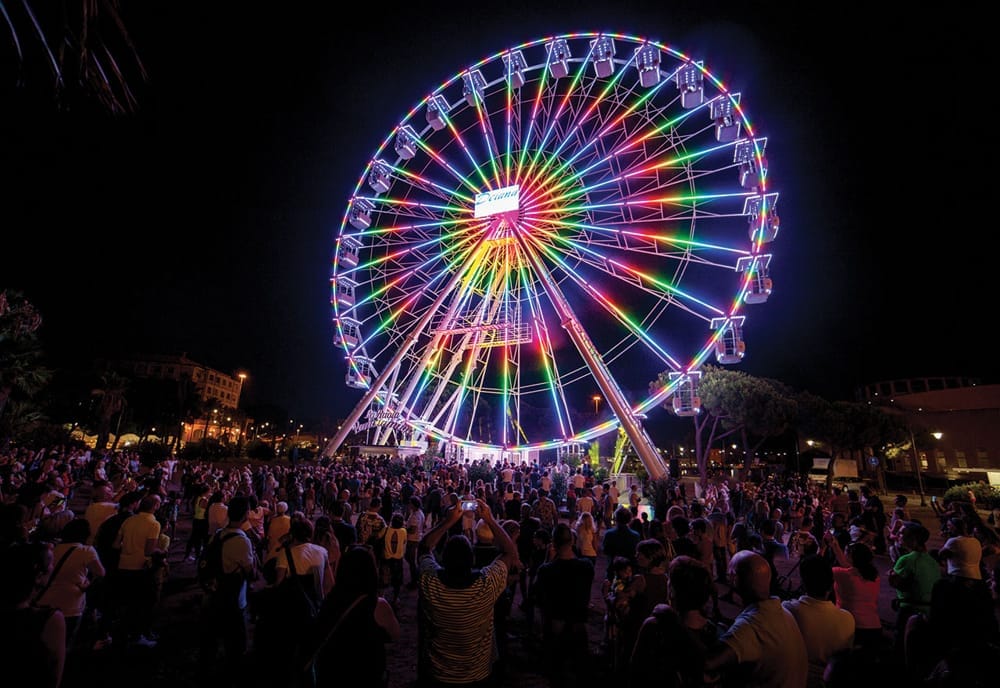 La Maestosa is one of the best places to visit in Olbia. This summer the wheel has enriched the tourist attractions of the city allowing it to offer a new point of view on the city.

A new idea to attract tourists who often arrive in the city and then immediately move from the port and the airport to the seaside resorts of the north-east coast. How much does the Olbia Ferris wheel cost?

The full ticket for adults costs € 8.00 – Children up to 10 years pay 5.00. Admission to disabled people with a companion is free. For groups, please contact the cash desk.

Places to see in Siena Italy