Eisenstadt is a small Austrian city. The name comes from the iron mines in the area. It is the capital of the federal state of Burgenland. Below we are listing best places to visit in Eisenstadt.

Only about 14,000 people live in the city. In no other capital of a federal state are there so few. People lived in the area as early as the Iron Age. In the time of the Celts there was a castle there. 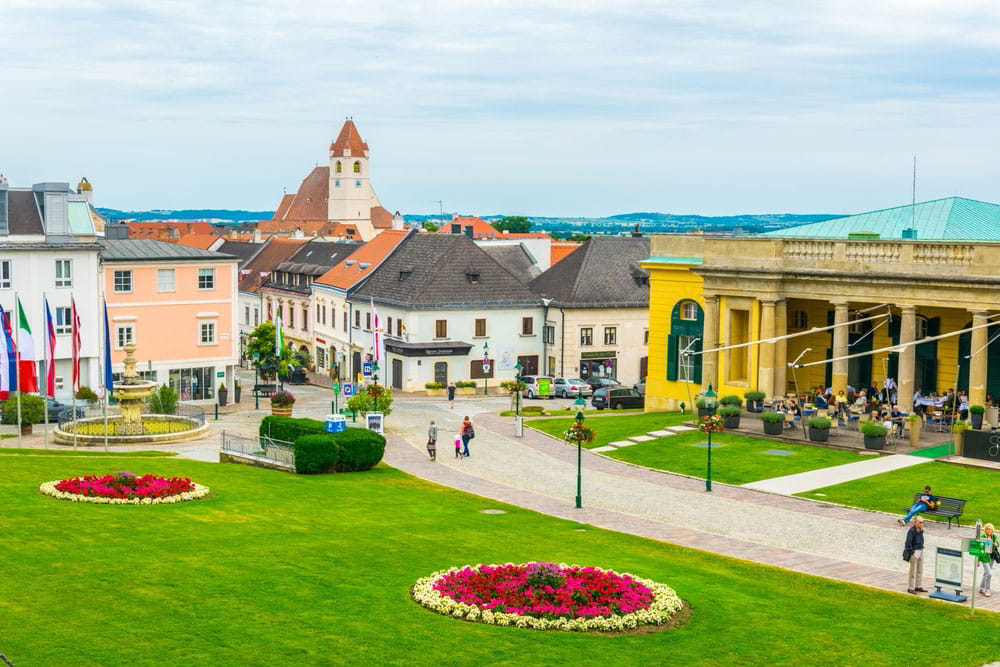 The area has belonged to the Kingdom of Hungary since the Middle Ages.

In 1648 Eisenstadt became a royal free city that had no one over it except the King of Hungary.

The king was also Emperor of the Holy Roman Empire. After the First World War there was a dispute as to whether the area with Eisenstadt should belong to Hungary or Austria.

Eisenstadt then became the capital of Burgenland, a new federal state of Austria. There are still many old buildings as sights in Eisenstadt.

This includes the Haydn House: the famous composer Joseph Haydn worked in the city for several years, for the Esterházy family.

Once the birthplace and residence of important magnates, Esterházy Palace is centrally and prominently located in the state capital Eisenstadt.

It is considered to be one of the most beautiful baroque castles in Austria and is now a museum, cultural venue, research center and houses the unique private collection of the Esterházy family.

We suggest to take a trip to Esterházy Palace because is one of the best places to visit in Eisenstadt.

Let yourself be inspired, too, where Lord Nelson once listened to the sounds of Joseph Haydn and enjoy rooms that tell a story. Location

The Haydn House is that former residential building of the great composer and thus a historical and authentic location.

Joseph Haydn acquired the baroque house in 1766 as the princely Kapellmeister at the Esterházy court and lived there with his wife Maria Anna Theresia for twelve years.

Embedded in the baroque town of Eisenstadt, the Haydn House Eisenstadt is a jewel of Burgenland’s cultural history. Also a music memorial of international relevance.

The Landesmuseum Burgenland is a universal museum that shows over 10,000 years of human history in the region.

The history and traditions of Burgenland are conveyed and explained in a lively, creative and contemporary way.

This makes the Landesmuseum Burgenland a place of learning for young and old, a place of lived customs, a place that tells living stories.

Annually changing special exhibitions take up a wide variety of topics and are presented in a competent, modern and family-friendly manner.

For this interesting facts we suggest to go to Landesmuseum Burgenlandv because is one of the best places to visit in Eisenstadt. Location

The Haydn Church , also known as the Bergkirche, is one of the most beautiful baroque churches in Burgenland.

The pilgrimage church “The Visitation of Mary” was built in the years 1715-1803 according to the plans of Prince Paul I. Esterházy.

The Schlosspark Eisenstadt is one of the most important landscaped gardens from the 19th century with a size of almost 50 hectares.

A walk through the princely court garden is an experience in every season. The Leopoldinentempel and Leopoldentenich ensemble, which was completed in 1824, is particularly romantic.

In this round temple there is a copy of the statue of Princess Leopoldine Esterházy, created by the famous Italian sculptor Antonio Canova. The original is in Esterházy Palace. Location

The Schlosspark Eisenstadt is one of the most important landscaped gardens from the 19th century with a size of almost 50 hectares.

A walk through the princely court garden is an experience in every season.

The Leopoldinentempel and Leopoldentenich ensemble, which was completed in 1824, is particularly romantic.

In this round temple there is a copy of the statue of Princess Leopoldine Esterházy, created by the famous Italian sculptor Antonio Canova. The original is in Esterházy Palace. For this reason we suggest to visit Leopoldinentempel because is one of the best places to visit in Eisenstadt. Location

The “capella Sancti Martini” mentioned in the document of 1264 can be regarded as a precursor church.

The founder and builder of today’s church is Hans Siebenhirter, who had been a pawn of Eisenstadt since 1463.

In 1495 the nave vault of the church was completed.

The four-storey north tower with a hipped roof and corner turrets was built around 1520.

The expansion of the south tower did not take place. The nave collapsed in the fire of 1589 and was only rebuilt in 1628.

The Landesgalerie Burgenland is a venue for contemporary and modern art in all its forms: Fine arts, plastic and sculpture, installations and media art. For more information check official website. 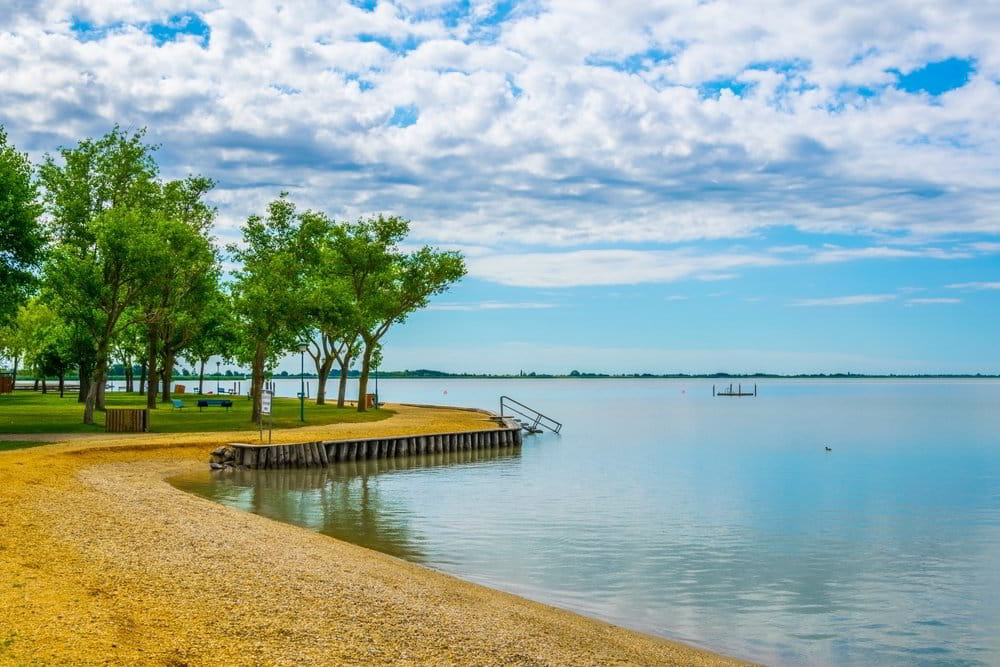 As the only steppe lake in Central Europe, Lake Neusiedl is located on the western edge of the Little Hungarian Plain, at the foot of the foothills of the Eastern Alps, in the northernmost section of Burgenland.

It is the natural border between Central Europe in the narrower sense and Asia in the broader sense, an intersection of two landscape elements: the foothills of the Central Alps, which protrude like spurs and islands to the east, and the wide, dry plains and rolling hills of the east. 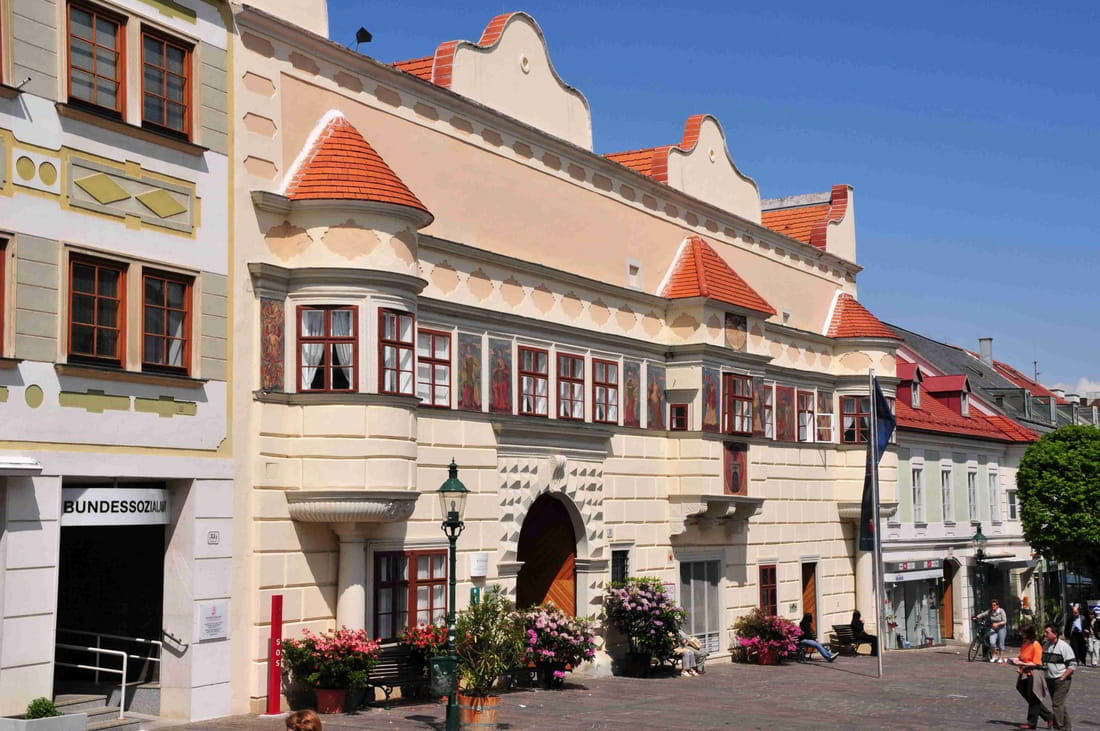 The town hall in Eisenstadt sees itself as an open house for all Eisenstadt residents and for our guests.

Therefore, when the historic building was renovated and expanded, the spacious foyer on the first floor of the building was designed as a space for exhibitions and events.

This town hall gallery mainly shows works by artists from Eisenstadt and the region.