Most famous places in Salzburg Austria

Is worth visiting this city and for this reason we are listing the most famous places in Salzburg Austria. Salzburg is a federal state in the middle of Austria. A little more than half a million people live here, making Salzburg one of the smaller federal states.

At our most important tourist attractions, not only are you able to experience Salzburg’s rich history, there are also countless fascinating insights and surprising moments around practically every corner. In 2018, 29.3 million tourists visited Salzburg. In conclusion everyone should see Salzburg once in a lifetime.

The capital of the country is also called Salzburg and is located on the Salzach River. About 150,000 people live there. The city of Salzburg got its name from the salt transport on the Salzach. Salzburg had been its own principality since the Middle Ages and was ruled by a bishop.

The area only came to Austria in 1805, about 200 years ago. The Salzburg princes loved art. For example, they sponsored musicians like Wolfgang Amadeus Mozart, who was born in the city. That’s why Salzburg is called the “Mozart City”.  If you are planning to visit Salzburg read best luxury hotels in Salzburg Austria.

Archbishop Gebhard built the fortress in 1077. In the following years his successors were responsible for the further development of the fortress architecture.

Around 1500, under Archbishop Leonhard von Keutschach, the fortress received its present-day appearance and thus significantly shaped the Salzburg city panorama. The original aim of the fortress was to protect the principality and the archbishops from enemy attacks. In all these years it has never been taken by foreign troops.

The name Mirabell is a female given name from Italy and is made up of mirabile “admirable” and bella “beautiful”. The Marble Hall, the former ballroom of the Prince Archbishop, is now one of the “most beautiful wedding halls in the world”.

Father Leopold Mozart and his children Wolfgang and Nannerl played in it. Today, weddings, conferences and honors take place here on a regular basis The setting for the atmospheric Mirabell Palace Concerts: The “angel staircase” that leads into the marble hall is adorned with numerous putti.

One house in Getreidegasse attracts special attention: No. 9, the birthplace of Wolfgang Amadeus Mozart.

Salzburg’s most famous son was born here on January 27, 1756. For a full 26 years, from 1747 onwards, the family lived in an apartment on the third floor.

Mozart spent his childhood and youth here with his parents Leopold and Anna Maria and sister “Nannerl”. In 1773 the move to Mozart’s house on Makartplatz followed.

The cathedral is the heart of Salzburg.  There is a lot to discover here: the baptismal font, the crypt, the art installation “Vanitas” or the reliquary with the bones of Saints Rupert and Virgil.

In addition, many stories are hidden behind the seven bells and the three entrance doors.  And if you look closely, you will see doodles in the marble in the entrance that are 370 years old.

The Prince Archbishop of Salzburg, Markus Sittikus, planned Hellbrunn Palace as a place of fun and relaxation that had never been seen before. The summer residence was built in a record-breaking short construction period from 1612 to 1615. Master builder Santino Solari, who was also commissioned for the Salzburg Cathedral, created one of the most magnificent late Renaissance buildings north of the Alps.

When visiting the permanent exhibition “SchauLust” you can tour the rooms and learn more about Hellbrunn’s history. Lovers who are willing to marry will also find the perfect backdrop for the most beautiful day in life.

The Getreidegasse is not only known as a shopping street but also for its history-steeped atmosphere with its wrought-iron guild symbols and passageways.

Characteristic of the architecture of the houses in Getreidegasse are the beautiful house portals and windows that get smaller from the first floor.

In addition, the old houses are often decorated with dates, the names of the previous occupants or the eye of God.

With around 1,500 animals of 150 species, the former “Hellbrunn Zoo” offers an exciting experience. From the harvest mouse to the white rhinoceros, creatures of all sizes are represented – and from different continents.

A special centerpiece of the zoo is the Africa part with a spacious savannah and lion house. Eurasia attracts for example with the red panda, alpine ibex and brown bears. From America you will see sloths and a lowland tapir, among other things. Australia, for example, is represented by parma kangaroos. 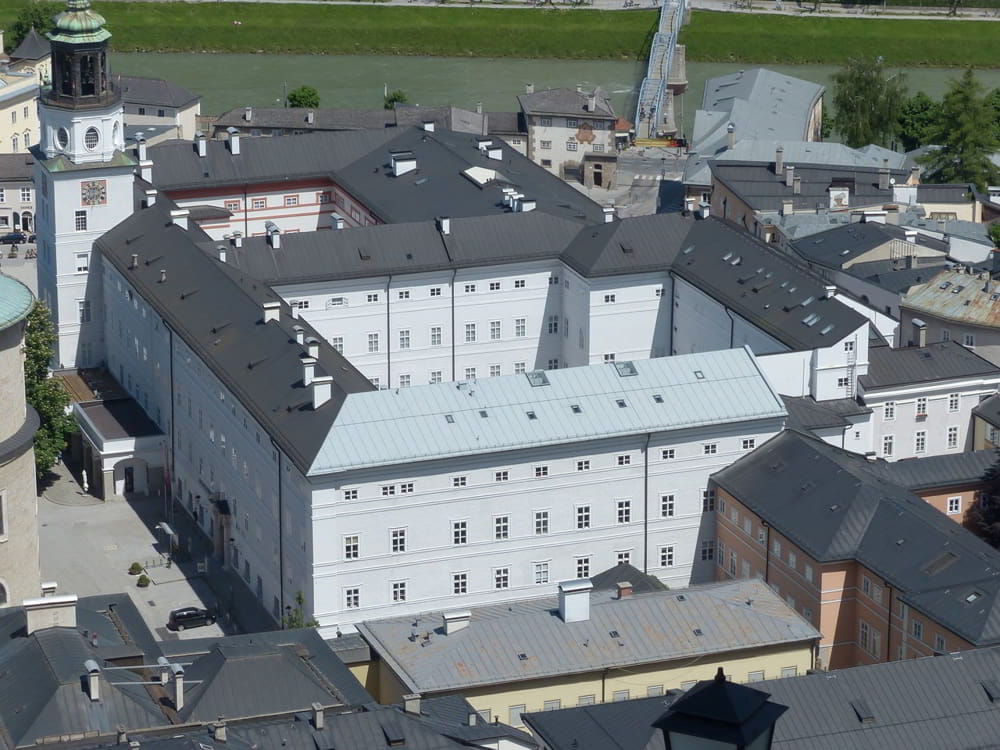 The Salzburg prince archbishops shaped the city and the state of Salzburg in many ways during their reign. In addition to the spiritual and secular rulers, a number of other interesting men and women of Salzburg have enriched the city.

On the first floor there is an exhibition with a focus on the subjects of art, science, architecture, literature, music, photography, the world of work and handicraft.

The old market in the old town of Salzburg was laid out as an urban trade and market place as early as the 13th century.

Between 1873 and 1927 the square was named Ludwig-Viktor-Platz, after the youngest brother of Emperor Franz Joseph I, Archduke Ludwig Viktor, who lived in Klessheim Palace from 1861. We suggest to spend some time in Old Market because is one of the most famous places in Salzburg.

Immediately below the Mönchsbergfelsen the Sigmundstor flows into the Herbert von Karajan-Platz and thus forms the direct access to the old town.

Most famous places in Salzburg Austria