ItalyVenetoBest things to do in Peschiera at Lake Garda

Best things to do in Peschiera at Lake Garda

Peschiera del Garda is one of the three major cities of the lake, which develops on the southern shore, surrounded by meadows and woods.

Compared to the nearby tourist center of Sirmione, Peschiera does not live on tourism alone but this does not mean that there are not good reasons to choose it for your holidays.

The picturesque harbor, in fact, has a lot to offer, both from a cultural and architectural point of view. 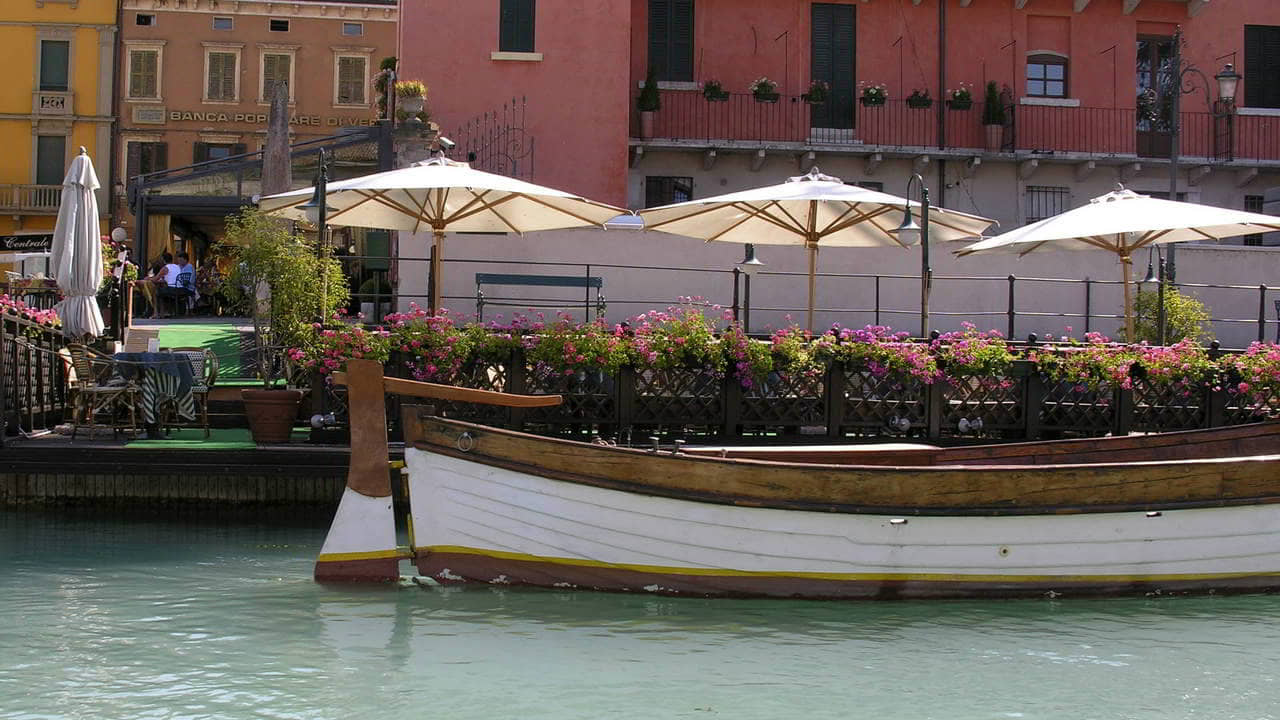 Peschiera del Garda is one of the most characteristic villages of Lake Garda: it overlooks the lower Veronese shore of the lake at the point where the Garda waters flow into the Mincio outlet and is completely surrounded by canals.

The historic center of Peschiera del Garda is in fact delimited by the walls that have changed the natural course of the river.

The first settlements date back to the Bronze Age (typical finds have been found: arrowheads, swords, etc.). In Roman times Peschiera became an important center: there is the testimony of Pliny the Elder and the name Peschiera.

To facilitate the connections, in addition to the natural route of the lake and the Mincio which allowed rapid communication to the city of Mantua.

The so-called via Gallica was built in Roman times that connected Bergamo and Brescia to Verona, touching precisely the Peschiera del Garda.

Near Peschiera, towards Salionze sul Mincio to be precise, tradition reports that Pope Leo I stopped Attila “the scourge of God”, without weapons, on the Mincio ford in 492 after a campaign of conquest and destruction started by the remote territories of Asia Minor.

Below you can find Top 7 best things to do in Peschiera at Lake Garda (Peschiera del Garda).

The magnificent sanctuary of the Madonna del Frassino is located south of Peschiera. The building was built to thank the Mother of God who appeared here to a farmer while he was busy working the fields. The Sanctuary was built in the 16th century, history has it that right under an ash tree Bartolomeo Broglia was saved by a giant snake by the Madonna.

While working his vineyards, Bartolomeo was suddenly threatened by a huge snake, out of fear he began to pray and invoke the mother of God, who appeared to him and chased away the snake. The Sanctuary of the Madonna del Frassino in Peschiera can be reached along an avenue of cypresses.

The single-nave church was built in 1514 and was subsequently enlarged and rebuilt several times. Inside there is a barrel vault full of frescoes, paintings and decorated stuccos. On the side altars there are some sculptures by Paolo Farinati and a Madonna commemorating the apparition.

2.The bike path along the Mincio – from Peschiera to Mantova

The pleasant cycle path along the Mincio River connects Lake Garda with the city of Mantova. It is ideal for families and passes numerous sights and picturesque villages.

The Mincio surprises its visitors with a beautiful natural landscape, castles and medieval villages that invite you to linger. The rural idyll between the south coast of Lake Garda and Mantova is best explored by bike.

The bike path starts in Peschiera del Garda at the mouth of the river Mincio and then leads parallel to the river in the south. The route runs to the right and left of the river, mostly off the road and is mainly paved.

The first section, after the imposing walls of Peschiera, is a shaded trail lined with poplars and cypresses. The landscape of the moraine hills is characterised by the cultivation of grain and wine.

In Monzambano you overlook the castle and the well-preserved old town. There is also an opportunity to make a short detour of about 7 km to the nature reserve Castellaro Lagusello. 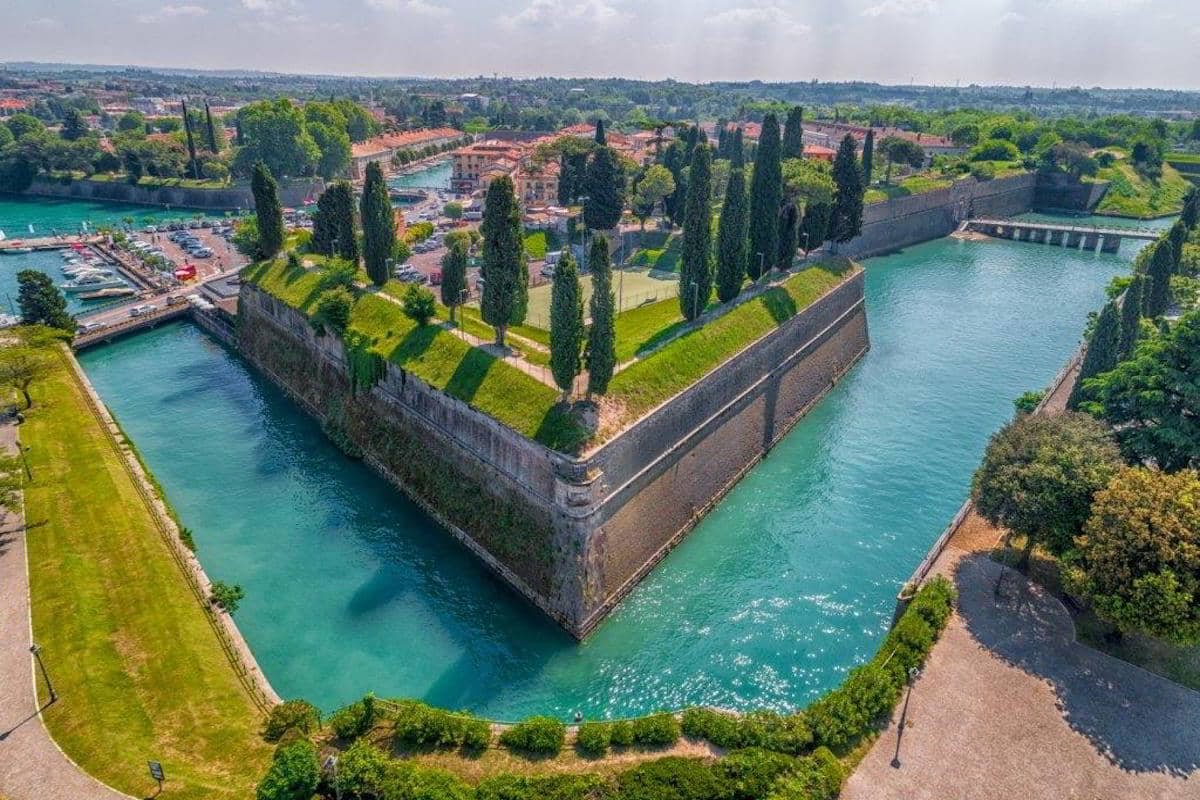 Visit Fortezza is one of best things to do in Peschiera at Lake Garda (Peschiera del Garda). Discover the most evocative corners and the historical background of our beautiful city through the modern audio guide created by the municipality in nine different languages ​​and available for free by downloading from a smartphone with QRCODE.

Peschiera is a Roman fort, Scaliger castle and fortress, bastion fortress of the Venetian republic in the sixteenth century, Napoleonic fortress, Habsburg stronghold of the legendary Quadrilateral.

In very few cities all the fundamental periods of the fortification are present: Peschiera del Garda is one of them, so much so that in 2017 its Venetian walls became a World Heritage Site and a UNESCO site. 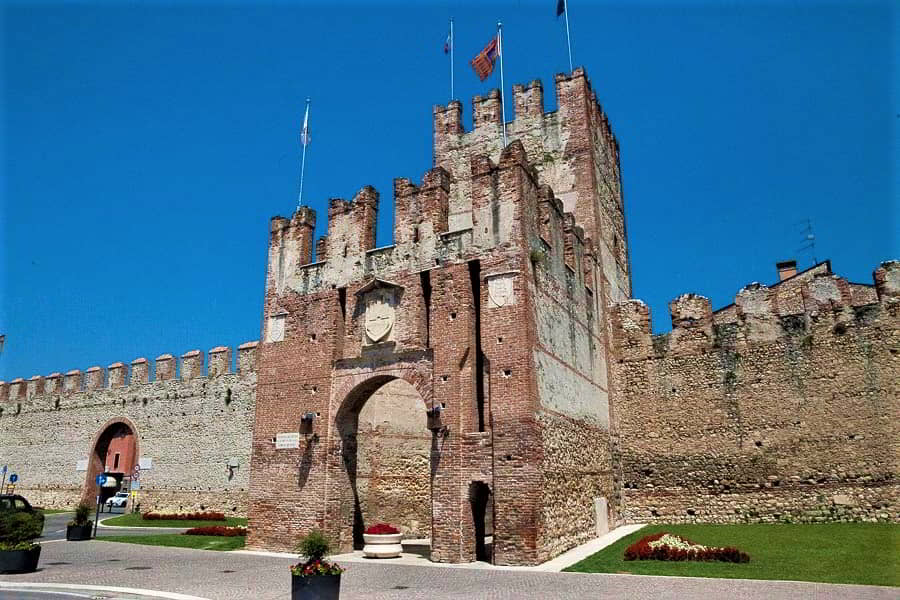 Verona Gate – Porta Verona is the city’s main entrance, the most renowned and architecturally significant of the city’s gates.

When the walls were constructed in 1369 by order of Cansignorio della Scala, the city ran along a main access from Porta Aquila to Porta Verona, one facing the valley to the north, the other opening towards the original Roman road called Via Postumia.

The gate is made up of two main elements: the defensive tower which was built together with the city walls, and the gate itself, which was added to the front of the structure later. 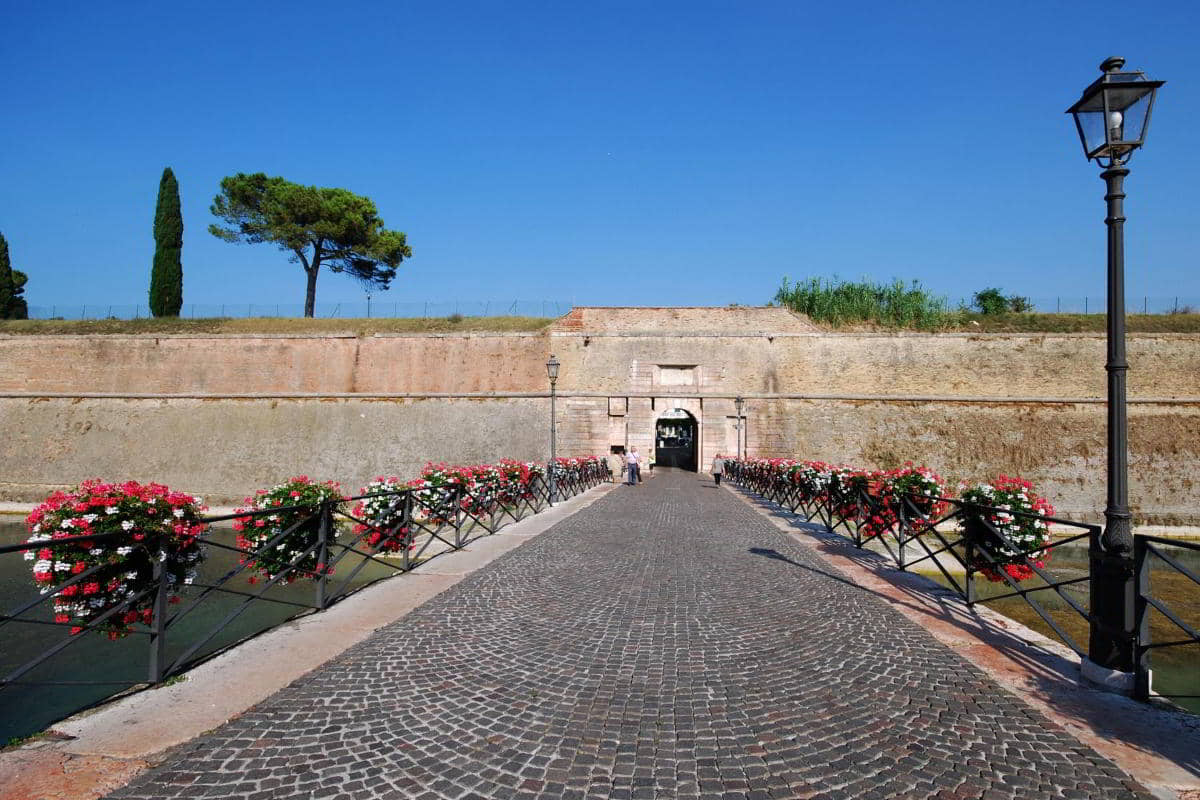 Brescia Gate – Brescia Gate. We agree to start your visit from the parking lot outside the fortress, near the Gate of Brescia.

Porta Brescia, also known as “gate of campagna”, has access to fortress. Your very simple and compact architecture is typical of military differences.

The imposing bastions of the XVI century, protruding from the fossae that are close to the other three canals circling the fortress, can be seen from where.

From where, above the ponte, designed by Anton Maria Lorna in 1760, we traversed the historic center of the city, adjacent to Piazza San Marco. 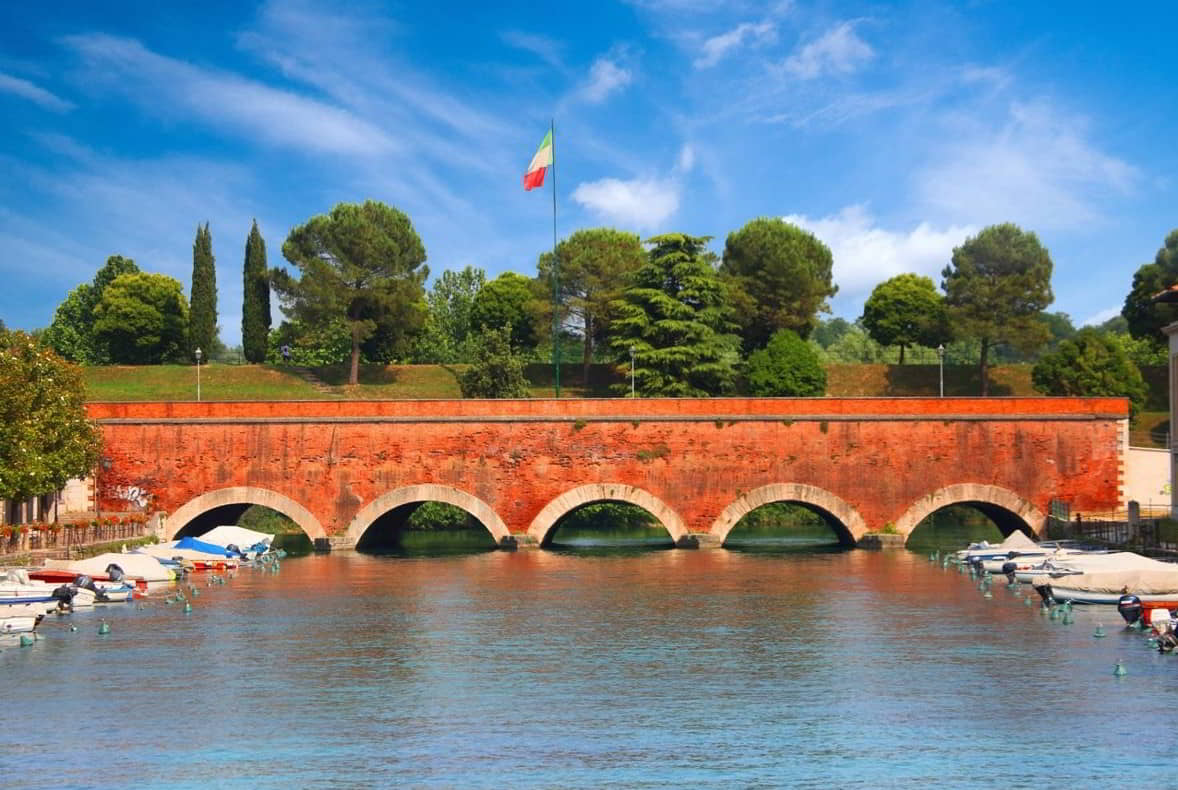 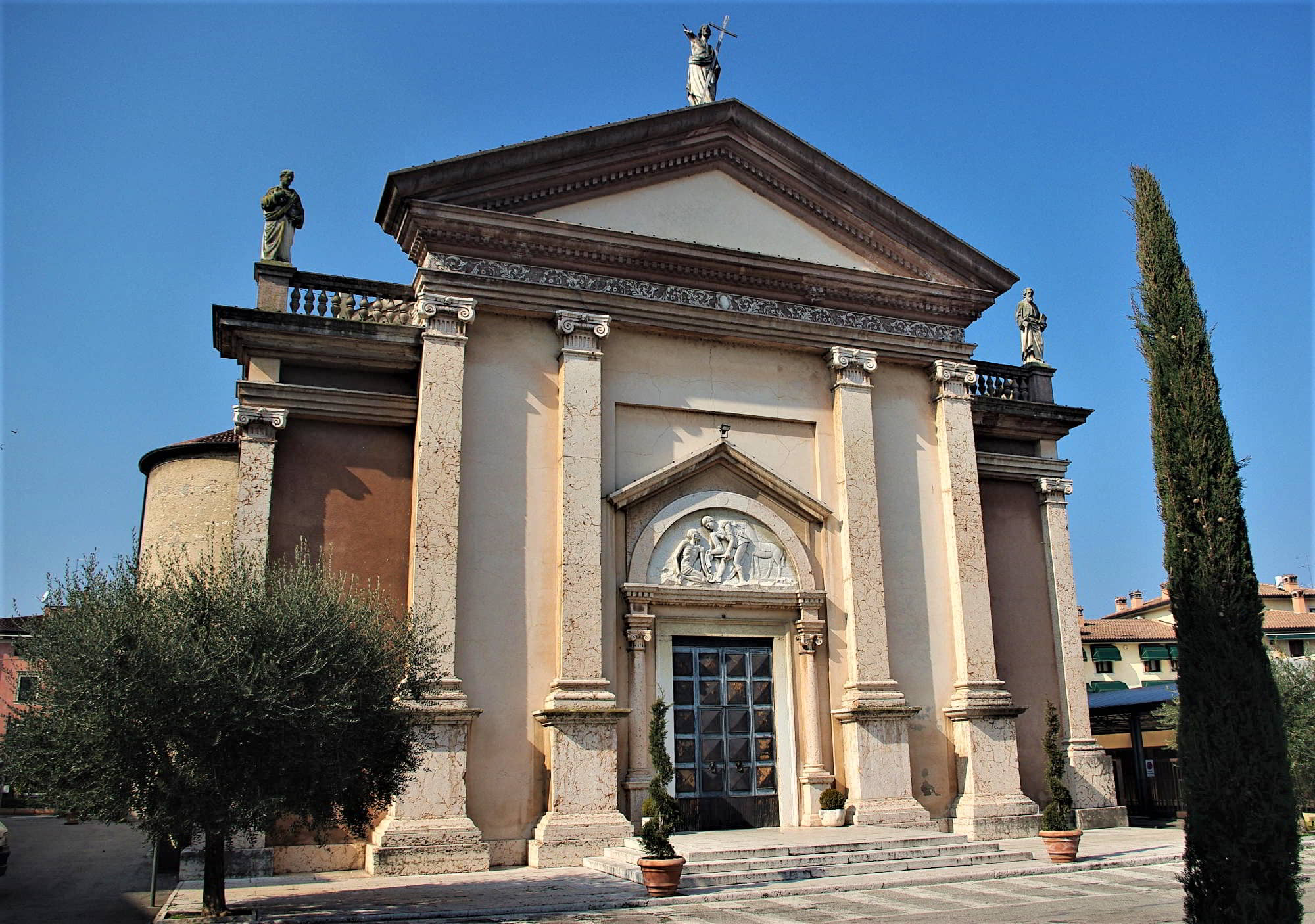 The church of San Martino is a religious building located in Peschiera del Garda, in the province of Verona. It is located in the historic center of the town, and is considered one of the oldest churches in the diocese of Verona. The first evidence of a church dedicated to San Martino dates back to 1008: De plebe S. Martini located in vico Piscaria.