Most beautiful places to visit in Orleans, France

One hour from Paris, Orleans relies both on its modernity and on the authenticity of its historical, cultural and natural heritage. For this reason we create this article with most beautiful places to visit in Orleans France.

At the heart of the Loire Valley, Centre-Val de Loire region, this City has many historical and heritage assets which have made it so famous. Discover the time of a weekend, its river, its history, its monuments, museums, gardens and castles.

One hour from Paris, Orléans relies both on its modernity and on the authenticity of its historical, cultural and natural heritage.

In this article we are listing Top 10 most beautiful places to visit in Orleans in France. Also we suggest to discover the “Destination Orléans” application.

If there was to be only one emblem of the city, it would probably be the Sainte-Croix Cathedral.

Classified as a historical monument since 1862, the building has two towers of more than 80 meters which are visible wherever you are in the town.

Built on the foundations of a 4th century Roman temple, the monument, supported by very high stone columns, has undergone many reconstructions until today.

Visitors will particularly appreciate the strange gargoyles that adorn the facade as well as the long arrow pointing up to the sky, characteristic of the Gothic style. Indispensable for those who do not know the city.

A stone’s throw from the cathedral, this former mansion is renowned for having notably accommodated Charles IX and Catherine de Medici, shortly after its construction in 1549.

It is also here that the young François II succumbed in 1560, after 17 short months of reign.  Nowadays, the hotel is used to host official city weddings and ceremonies.

An original facade, made of red bricks arranged in diamonds, will allow you to easily recognize the place, surrounded by romantic-style gardens conducive to strolling and resting. Balzac, who did not allow himself any respite, later spoke of it as “the largest and most splendid house in Orleans”.

Unsurprisingly, you will find many references to Joan of Arc on your route as you explore the city.

The equestrian statue of the Place du Martroi, inaugurated in 1855, is one of the most imposing and emblematic of the city.

Lung of political and public life, this downtown square is now popular for its cafes (La Chancellerie, La Renaissance, Leffe), its galore terraces and its famous merry-go-round.

We quickly forget that the place was, two centuries ago, reserved for executions, and that it is here that the guillotine was set up during the Revolution.

Note that since 2013, the square has been entirely pedestrianized, to the delight of tourists.

From June until October, the park remains open once a month after sunset: The opportunity to extend your visit around a picnic, to enjoy a show family at night and walk by the light of a lantern (offered by the Park) and its gardens highlighted.

Initiated in 2011, this event brings together nearly 100 exhibitors from all over France: nurserymen, furniture designers, artists, landscapers, second-hand dealers, horticulturalists, tailors and groups of amateurs.

This is an opportunity to prepare for summer in your garden: trees, shrubs, aromatic and vegetable plants, annuals or perennials, roses … but also garden furniture and accessories, tools and decorative objects for the outdoors. On our opinion Parc Floral de la Source is one of the most beautiful places to visit in Orleans.

The House of Joan of Arc is a half-timbered house, a reconstruction of the 1960s of the residence of Jacques Boucher, general treasurer of the Duke of Orleans, who lodged Joan of Arc from April 29 to May 9, 1429 during the siege from Orleans.

Restructured and modernized the House of Joan of Arc offers visitors:

On the ground floor a multimedia room showing a panoramic film on the Hundred Years War, the life of Joan of Arc and her memory in Orleans and offering terminals interactive, an illustrated timeline and a cartography of the epic of Joan.

Housed in a splendid Renaissance hotel built in 1550 for Philippe Cabu, lawyer at Châtelet and attributed to the architect Jacques 1er Androuet du Cerceau.

The courtyard facade is organized on three levels and is adorned with a rich decoration with the three superimposed orders, typical of the Henry II style.

The Historical and Archaeological Museum of Orléanais was badly damaged following the bombing of June 1940. It took more than twenty years to reopen its doors to the public.

Housed in the Cabu hotel, one of the most beautiful Renaissance monuments in the city, the museum houses the Neuvy-en-Sullias treasure, an exceptional collection of Gallic and Gallo-Roman bronzes. It also presents objects and works evoking the history of Joan of Arc and that of Orleans. 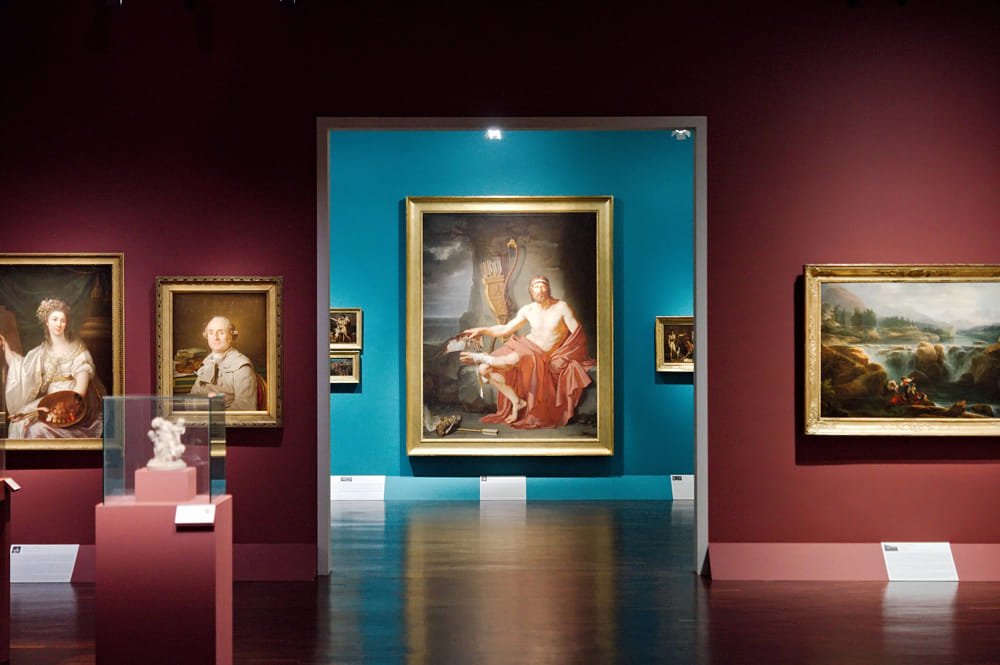 One of the finest art collections in Europe, for one of the largest and oldest museums in the country. There are 2,000 paintings, 700 sculptures, and many works of art spanning the 15th to 20th centuries.

The currents of the 19th century (romanticism, realism, academism) are also well represented.  A panorama of contemporary and modern art (Picasso, Soutine, Zao Wou-Ki…) allows you to discover works closer to us. If you love art you have to visit Orleans Museum of Fine Arts just because is one of the most beautiful places to visit in Orleans.

8.The bridge of Europe

This surprising bridge stands out in the middle of temples, churches, and other ancestral buildings: designed in 1996 by star architect Santiago Calatrava, it is one of the few pieces of contemporary art in the city.

Its design is also unique in France: a bow-string arch extending over 378 m, with three spans, the main one of which is suspended from an inclined arch located on the edge of the deck.

If the construction of the Pont de l’Europe made people cringe at the time, everyone uses it today to span the Loire. We suggest to take some pictures in Le pont de l’Europe because is one of the most beautiful places to visit in Orleans.

This place brings together an impressive collection of treasures and documents (manuscripts, letters, studies, theses) linked to the life of the famous writer born in Orleans.

A museographic space allows you to retrace the life of this normalien, militant and Catholic Dreyfusard, who managed to get out of his modest environment to access the intellectual elite of his time.

This free museum was completely renovated by the city in 2014, on the occasion of the centenary of the death of the committed poet.

10.The castles of the Loire Valley

A few steps from Orléans Métropole, the castles of the Loire, are a plae you have to visit. If you are on a weekend , short stay or on holiday in the Orleans region, you will undoubtedly like to discover the many castles in the region , whose fame is well established! In top of the list ofcourse is Chateau de Chambord continuing with Chateau de Chenonceau, Chateau d’Azay-le-Rideau and Chateau d’Usse. Other best chateau lists would include Chateau d’Amboise, Chateau de Blois or Chateau de Cheverny. To read the full list of the castles of the Loire Valley check this article “Most beautiful castles in Loire Valley“.

Most beautiful places to visit in Orleans, France