Things to see in Billund Denmark

In central Jutland, Billund is a modest town with a big story to tell and many things to do. It is the birthplace of LEGO and has the original LEGO factory and Legoland resort. The amusement park is the reason most people come down to Billund, and it’s a world-class attraction that the little dudes are sure to love. If you spend part of your trip branching out into the wider area, you can see Denmark’s best Viking sites, visit open-air museums of all descriptions and come face-to-face with a lion at Gifskud Zoo. Billund is situated in southern region. Below you will find a list of the things to see in Billund Denmark.

The world’s first Legoland, this attraction has been going strong for almost half a century and is the most visited place in Denmark, not Copenhagen. There are nine LEGO-themed lands for kids to discover, but the part everyone will see is Mini Land. Here, monuments and cityscapes from all over Denmark and the world have been built to LEGO’s 1:20 scale.

Part of the National Museum of Denmark, Kongernes Jelling is a free attraction that preserves a UNESCO-listed 10th century Viking monument created by King Harald Bluetooth. Here, cut to a large round, Harald describes how he conquered Denmark and Norway and brought Christianity to the region. It marks Scandinavia’s transition from paganism to monotheism.

This zoo and safari park is just a short hop from Legoland. If you have your own car, you can drive through a series of large open enclosures to get a first-hand view of African savannah species such as rhinos, antelopes, lions, giraffes and zebras. The lions that run around the fields at Givskud Zoo are the largest in Northern Europe. This is considered as one of the things to see in Billund Denmark.

Less than ten minutes by road from Billund is Vandel, where a large German military airport was built during the war. Eight hundred local residents were forced to leave their homes for this building in 1943. After the conflict, the airport was used by the Danish army and police until 2003, but nothing except a large bunker remains from the wartime era. Inside this installation you can see pieces of wartime memorabilia and get an insight into the airport and the impact of the war on this part of Denmark.

Lallandia Billund is an amusement and activity center that opened in 2009. In the summer, the children will dive straight into the Aquadome, the largest water park in Scandinavia. Teenagers and little ones can jump down slides and take in the wave pool, while adults can retreat to the wellness area, where massages, saunas and spa treatments await. 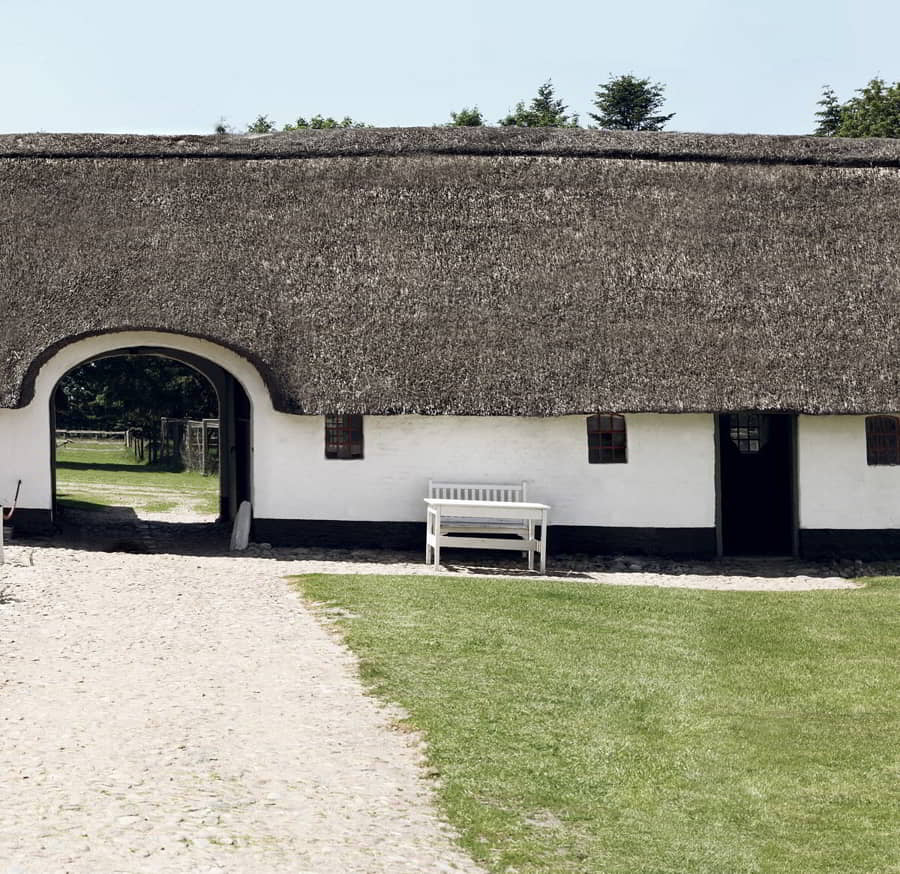 A pastoral attraction that also brings you close to Danish cultural heritage, Karensminde is a historic farm from the 18th and 19th centuries. You can see how the farmers worked the land in those times and all the different animals they kept: sheep, pigs, goats, chickens, horses, rabbits, which either wander freely or are kept in open enclosures.

After all the local resorts, this church is a reminder that Billund is still a quiet rural area. You can spend a few minutes pausing at Grinsted Church and looking at the century-old interior before heading out to the next attraction. The majority of this whitewashed building dates from the 1100s, with updates two centuries later, while the church tower was added in the 1920s.

LEGO factory tours must be arranged months in advance and the experience lasts for two days. For diehard LEGO fans, it will be a dream come true as you can see how the bricks and minifins are designed and produced, and visit creator Ole Kirk Kristiansen’s house, where LEGO sets from the 1930s can be found. During these two days you will even have a night with LEGO designers who will give you the inside track on how LEGO sets are created.

The Sculpture Park is located between Billund and Legoland, a 1.3 km long nature trail adorned with pieces of modern sculpture. It takes about half an hour to complete the tour, breaks as you walk to admire the works that children can freely climb and interact with. They create fun photo opportunities and there are 18 in total to see, each by some of Denmark’s most prominent sculptors.

This family-friendly hotel features free sauna and gym access. It has a private entrance to the popular Legoland Billund Theme Park, open between the end of March until October. Rooms include free WiFi, flat-screen TVs and Lego gifts for all children. The colourful rooms of Hotel Legoland include a tea/coffee maker and a child-friendly bathroom. Many rooms offer great views of the theme park, while some also include themed décor with play tables and Lego bricks.

Things to see in Billund Denmark

Things to do in Slagelse Denmark

You can enjoy too many things to do in Slagelse Denmark. This city is Zealand's fourth largest city and is one of Denmark's oldest...

Things to do in Horsens Denmark