ItalyTuscanyPlaces to see in Siena Italy

Places to see in Siena Italy

This article will explore best places to see in Siena Italy. Cultured city and ideal destination for lovers of good food, Siena already fascinates by looking at it from afar.

UNESCO called it “a masterpiece of dedication and inventiveness in which the buildings were designed to be adapted to the entire design of the urban structure”.

The history of Siena begins as a Roman military colony at the time of Emperor Augustus. Only from the 10th century that Siena began to acquire great political and economic importance.

It was at the center of important trade routes and in the turbulent years of the wars with nearby Florence it experienced its best period. Siena is situated in Tuscany Region. Let’s explore some of the best places to see in Siena

The top attraction of Siena is Piazza del Campo, the heart of the historic center and of city life.It is a sort of funnel where the three main streets of the center converge. It is rightly considered one of the most beautiful squares in the world for its unique shape and the harmony of all the architectural elements present.

It is one of the greatest examples of Romanesque-Gothic architecture in Italy, with an external facade characterized by a two-tone black-white and elaborate decorations. The magnificent exterior of the church is only a prelude to what you will find inside.

The Cathedral of Siena houses artistic treasures of inestimable value, including four statues sculpted by Michelangelo in the Piccolomini Chapel. It is one of the most beautiful places to see in Siena.

3. Torre del Mangia (That’s one of the best places to see in Siena)

The tower that stands next to the majestic Palazzo Pubblico is the Torre del Mangia. Builded  from 1338 to 1348, it is one of the tallest ancient civic towers in Italy. In the second half of the seventeenth century the bell called Campanone or Sunto by the Sienese was added.

From the top of its 87 meters (which become more than 100 if you also consider the lightning rod). It is possible to admire a magnificent view of the city of Siena and the surrounding countryside.

If the Palazzo Pubblico is the finest example of civil architecture in Siena. The most representative example of fourteenth-century private architecture is Palazzo Sansedoni. It was built by an important and wealthy Sienese family who subsequently acquired the adjacent buildings and aligned them. The result is a single building with a semicircular facade that follows the course of the square, the same building that we can still admire today.

5. Museum of the Opera of the Metro

It is a private museum established in 1869 which exhibits a collection of Italian art from the Middle Ages and the Renaissance of inestimable value.

It is really worth taking all the time necessary to visit the Duomo calmly and enter all its environments. Do not leave the church without having seen the Piccolomini Library, an area created in the late sixteenth century along the left aisle of the church.

It was built to house the very rich collection of books of Pope Pius II, but you will not find any volumes. On the other hand, it is entirely frescoed and is simply marvelous.

The visit to the Cathedral of Siena cannot be considered complete without having visited the Baptistery of San Giovanni. A separate building located in the homonymous square behind the main church. It is accessed via a monumental staircase.

8. Landscapes of Tuscany (Visit from Siena) 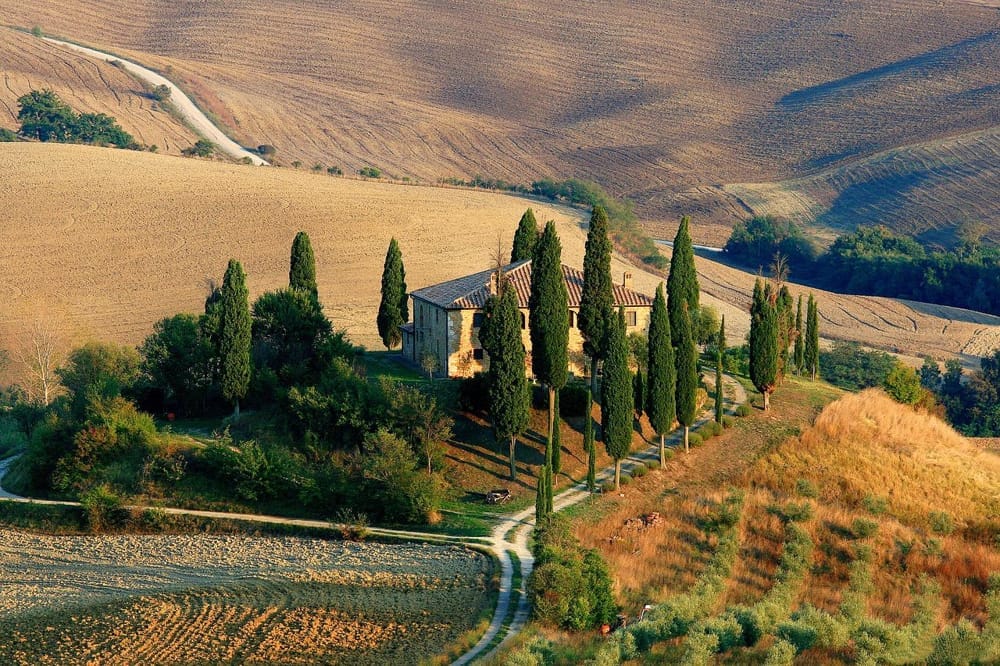 The Tuscan territory hides pearls of incredible charm both on the coast with glimpses of rare beauty, and in its interior where expanses of hills alternate with pristine woods. No doubt that Tuscany is one of the most beautiful areas in Italy. The area overlooking the Tyrrhenian Sea, for example, is famous for its forests that gently slope into the sand of the sea, as well as for the wild rocky coasts.

The interior is instead a succession of precious and original geological phenomena. Here waters and winds have shaped the surface of the territory and its subsoil, giving life to places such as narrow gorges, underground complexes and expanses of clay eroded by the wind.

This magnificent palace can only be visited inside on two occasions: on the day of the July Palio and the day before the August Palio. On the other days of the year it is possible to see an internal courtyard and some rooms on the ground floor.

An attraction that perhaps you would not expect to find in Siena is the Museum of Antarctica. A permanent exhibition that traces the history of the exploration of the coldest continent on Earth. Through historical documents, videos, interactive stations, samples of rocks and meteorites, objects used during scientific expeditions.

Another building that immediately catches the eye within the walls of Siena is Santa Maria della Scala. An ancient hospital founded at the beginning of the 9th century.

Remained a health resort until the 1990s, it then became an exceptional museum center. Both for the architectural value of the site and for the collections and temporary exhibitions that can be admired inside.